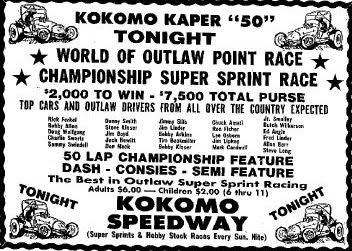 Bobby Adkins of Indianapolis finished third with Fred Linder of Fremont, Ohio, fourth and Dick Gaines of Mitchell fifth. Butch Wilkerson of Columbus took the sixth position with Doug Wolfgang of Lincoln, Neb., in the seventh spot and Rick Ferkel of Fostoria, Ohio, eighth, Allen Barr of Seymour in the ninth spot and Randy Kinser of Bloomington 10th.

Bobby Kinser, who was the fastest qualifier, won the first heat with Jack Hewitt of Troy, Ohio, second, Ferkel third and Adkins fourth.

The fourth heat was won by Wolfgang with Gaines second, Ron Shuman of Tempe, Ariz., third and Randy Kinser fourth.

All in all, it was an excellent sprint car program and viewed by a large crowd. Without a doubt, the Outlaws will make a repeat performance next season. And without a doubt, the drivers who run each Sunday night in the sprint car division at the local oval showed they could run with the best of them.