This Week in History - Knoxville Nationals

1984 – Doug Wolfgang of Sioux Falls, S.D., became only the third three-time winner of the Knoxville Nationals as he guided the Bob Weikert #29 to a popular victory on Saturday night, August 12. Wolfgang collected a record $20,000 plus contingencies for the 30-lap run. Sammy Swindell of Bartlett, Tenn., grabbed the lead at the drop of the green and looked strong in the early laps but Wolfgang soon caught the leader and put a slide job on Swindell in turns three and four on the lap 10 to take the lead for good. Steve Kinser of Bloomington, Ind., the 1983 Knoxville champ, also passed Swindell and would earn a runner-up spot. Swindell, who admitted after the race that he had chosen the wrong tire compound, settled for third. Thursday night preliminary winner, Brad Doty of Kittanning, Pa., finished fourth and Jeff Swindell of Memphis, Tenn., rounded out the top five. 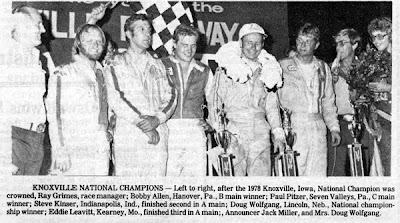 1978 – Doug Wolfgang of Lincoln, Neb., driving Bill Smith’s Speedway Motor Chevrolet, won the 30-lap Knoxville Nationals in Knoxville, Iowa, on Saturday, August 12, leading all the way from his outside starting position. An overflow crowd watched as Steve Kinser of Bloomington, Ind., challenged Wolfgang throughout the contest but had to be content with a second place finish. Pre-race favorite Eddie Leavitt of Kearney, Mo., driving the Max Rogers Chevy, took third while Shane Carson of Oklahoma City, Okla., drove the Bob Trostle sprinter to a fourth place showing. Danny Smith of Danville, Ill., completed the top five. Pole sitter Sammy Swindell of West Memphis, Tenn., was the hard luck story of the event, tearing out a rear end gear on the first lap of the feature. 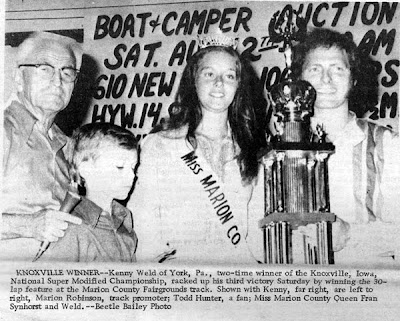 1972 – Kenny Weld of York, Pa., won his third career National Supermodified Championship at the Marion County Fairgrounds in Knoxville, Iowa on August 12, leading all but two circuits of the 30-lap feature. Weld, who also won the event in 1964 and 1965, led the first four laps before relinquishing the top spot to Billy Shuman of Tempe, Ariz. Shuman would lead laps five and six until Weld regained it for good and beat Shuman by nearly one-half lap on the ½-mile dirt oval. Weld, who also won the second heat said, “I just forgot what I was doing when Shuman slipped around me. But I figured I didn’t come all the way here to take second.” Shuman and Lonnie Jensen of Lincoln, Neb., dueled for the second spot throughout the remainder of the race. 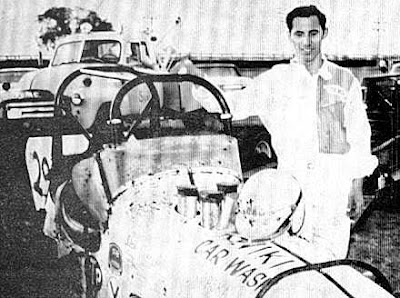 
1967 – Veteran Thad Dosher of Topeka, Kan., captured the National Supermodified Championships at the Marion County Fairgrounds in Knoxville, Iowa, on August 12 in accident-marred evening that claimed one driver’s life. Dosher gained the lead on lap 13 when pole sitter Joe Saldana of Lincoln, Neb., spun out and hit the fence of the 25-lap feature. Bob Williams of Kansas City, Mo., threatened Dosher during the final eight laps but could never claim the top spot and settled for second. Larry Cannon of Danville, Ill., Jerry Weld of Kansas City, Mo., and Bill Utz of Sedalia, Mo., rounded out the top five finishers. Two-time Nationals’ winner Ken Weld, Kansas City, Mo., hit the fence during the fifth lap and did not finish the race. A third accident in the championship event sent Hank Smith, Mount Ayr, Iowa, to the hospital with what were believed to be minor injuries. Dan Krueger of Kansas City, Mo., was fatally injured when his car collided with Stan Borofsky of Grandview, Mo., on the second lap of the consolation race.