1994 – Kevin Doty of Milan, Ill., scored a convincing victory in the 17th annual Miller Genuine Draft Belleville Midget Nationals, Saturday August 6th on the Belleville High Banks and took home the $10,000 first place payoff. Doty, who set a new track record in Friday night qualifying and then locked himself into the main event with a second place showing, blasted by Donnie Beechler on the cushion off of turn four on lap 10 and pulled away to a 10 car length lead. Beechler’s night ended on lap 25 with a broken rear end. Steve Knepper finished second, followed by Tommie Estes Jr., Jason Jonkman and Jerry Coons Jr.

1988 – Steve Knepper scored the biggest win of his career Saturday, August 6th by winning the 40-lap Belleville Midget Nationals feature at the Belleville High Banks. Knepper collected $6,500 of a $34,000 purse. Knepper jumped to the lead followed closely by Randy Roberts. The duo pulled away from the field and battled for the top spot. By the 10th trip Knepper had increased his lead on the half-mile and won by six car lengths at the finish. Roberts, Dan Boorse, Chuck Gurney and Robby Flock rounded out the top five finishers. 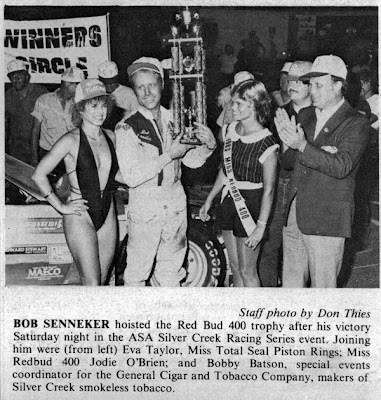 1983 – Bob Senneker won the ASA Silver Creek Racing Series-sanctioned Redbud 400 at Anderson (Ind.) Speedway by .6 of one second over Rusty Wallace before a record crowd of 11,312, on Saturday, August 6. In patent Senneker style, the Michigan ace measured the front-runners for the first half of the race then applied pressure in the latter stages. Senneker got around Wallace on lap 366 and by the narrowest of margins, took the checkers for the second straight year. Third place finisher Dick Trickle would be the only other driver to finish on the lead lap. Butch Miller (1 lap down) and Bob Strait (2 laps down) would round out the top five. 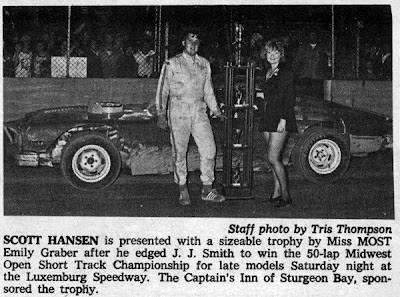 1977 – Twenty-two year old Scott Hansen of Green Bay, Wis., came through with the first victory of his blossoming three-year late model career on Saturday, August 5, by winning the 50-lap Midwest Open championship at the $1,000 first prize at Luxemburg (Wis.) Speedway. Hansen, driving a 1973 Camaro, started on the outside of fellow townsman Roger Perrot in the front row. Hansen looked at the back end of Perrot’s 1969 Camaro for 31 laps before he and J.J. Smith of Appleton, Wis., finally slipped by when Perrot went high in turn two. Smith dogged Hansen for the final 19 laps waiting for the youngster to make a mistake but Hansen drove a flawless rest of the race on the third-mile clay track. Smith, Perrot, Larry Ninneman of Milwaukee and Jerry Smith of Medina, Wis., rounded out the top five.