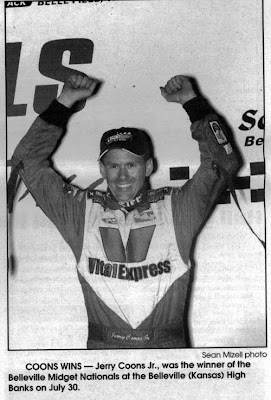 2005 - Battling a slumping right rear tire, Jerry Coons Jr. outfought Davey Ray to earn his first Belleville Midget Nationals title on Saturday night, July 30. Coons led all 40 laps on the 1/2-mile after starting on the pole. Ray stayed stapled to Coons' tail tank over the course of the final 25 laps as the lead duo began lapping cars. Coons kept Ray at bay, however, as they weaved in and out of traffic. Johnny Rodriguez, the defending USAC Western Midget Series champion, finished third, followed by Danny Stratton and Tracy Hines. 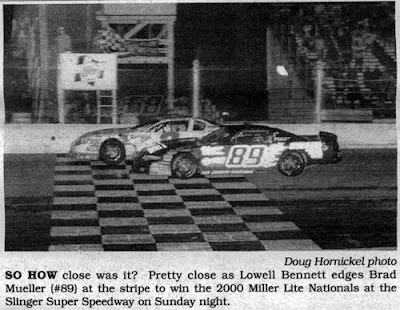 2000 - Lowell Bennett of Neenah,, Wis., and Brad Mueller of Random Lake, Wis., staged a spectacular battle for the lead in the final 10 laps before Bennett edged Mueller by less than one-half-car length to win his second Miller Lite Nationals title in the closest finish in the 21-year history of the prestigious late model event at Slinger Super Speedway on July 30. Bennett led most of the 200-lap event with Mueller applying pressure the last 50 laps. In another side-by-side battle at the finish, John Zimmerman of Markesan, Wis., edged Conrad Morgan of Wausheka, Wis., for third. 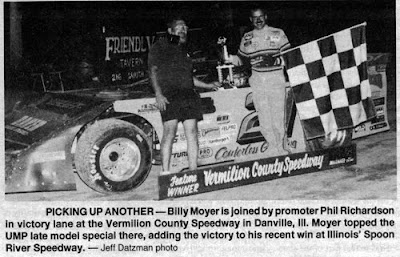 1995 - Billy Moyer Jr. of Batesville, Ark., took the lead on the 10th lap and went on to easily capture the 50-lap UMP Northern Outlaw Nationals on July 30 at Vermilion County Speedway in Danville, Ill. Kevin Weaver led the first 9 laps before mechanical issues sent him to the pit area. Moyer, who was also fast qualifier (14.208), took the top spot and won easily over runner-up John Gill. The victory earned Moyer $5,000.

1989 - Jay Maupin won and lost at the Dodge City (Kan.) Speedway Summer IMCA Sprint Car Nationals on July 29. Maupin was pleased about winning the 25-lap feature and when fellow competitor John Burton was waiting in the claiming area to buy Maupin's engine, he was more than happy to sell. Earlier this year, Maupin had won a IMCA sprint car race but refused the claim and was disqualified from national competition for 21 days and lost all of his points. Maupin started mid-pack and drove a smooth and steady race finishing ahead of Garry Lee Maier to the checkers. Dale Borger took third ahead of national point's leader Gary Zitterich, who made the 700-mile trek from Sioux Falls, S.D.