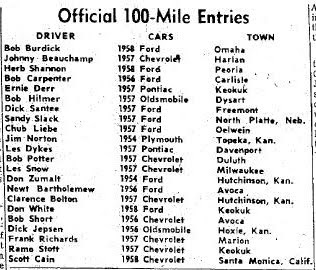 But if you are a speed fan, or maybe just curious, the place to be is at the North Iowa Fairgrounds, Saturday afternoon, for the late model 100-mile stock car race.

Simply, that the field of entries is big with the best in the business bidding to be top dog in an event that combines skill and endurance. They'll be circling 200 laps in an event that should last for than two hours, a little less

The field of driver’s numbers 22. Included are Ernie Derr, Don White and Johnny Beauchamp, all former champions of the International Motor Contest Association; Beauchamp, from Harlan, has been the king the past two seasons. Yet he's only fourth in the current point standings.

Holding the No. 1 spot is White and in the No. 2 position is Derr. Both are from Keokuk. In the No. 3 position - and also slated to run in Mason City is Bob Burdick of Omaha.

A lot of money hangs on the race. Promoter Al Sweeney figures a prize pot of about $2,000. The winner will receive $400 and an additional $25 if he is among the 20 fastest qualifiers. That figures out to about $2 for each trip around the half -mile oval at the North Iowa fairgrounds.

Time trials for the big race start at one o'clock and the 100-miler is slated to begin at two o'clock. The trials are important because fast time insures a place near the front of the field.

Driving skill and speed can help a driver move up in the field but it's a rough deal to work up from the tail end to the front of the pack.

A late model stock race was held at the fairgrounds in June, also operated by National Speedways, Inc. Burdick, only 23 years old, was the winner of the 25-mile feature before an estimated crowd of 4,000. That attendance is expected to be surpassed this Saturday.

Beauchamp has been the winner at the last two North Iowa Fairs in Mason City with the race a year ago cut to 101 laps. Much work has been done on the track since a year ago and it's reported to be in top shape.

White was the winner of the feature race at Oskaloosa on Wednesday night. A newcomer to watch will be Les Snow of Bloomington, Ill., second at Oskaloosa and third at Donnellson in recent races. He recently joined National Speedways to get in more racing dates. Last year he raced on the circuit for United States Auto Club and was the point leader for the season.

Sunday will be another big racing day at the fair as speedway races are slated in the afternoon. Bob Grim, the I.M.C.A. champ, will be headlining the field. However, he never has won a race in Mason City.