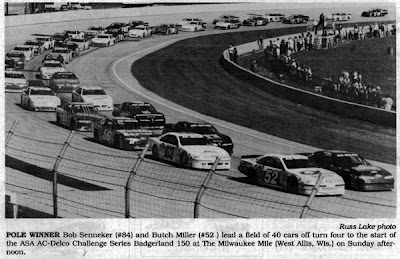 1994 – Veteran Bob Senneker took advantage of a late caution and made a daring four-wide pass on the outside with 27 laps remaining to score his first win of the year in the AC-Delco Challenge Series Badgerland 150 on August 28 at the Milwaukee Mile. After a “competition yellow” restart, Senneker bolted to the high side while Ken Schrader hugged the low groove on the green flag. In a spectacular four-wide race down the backstretch, Senneker and Schrader (both with fresh tires) swept past both Brad Loney and Bryan Reffner with Senneker securing the lead over Schrader as they entered turn three. From there, the Michigan ace pulled away and took the checkered flag a little over two seconds ahead of Schrader. Mike Eddy, Steve Holzhausen and Harold Fair rounded out the top five.

1988 – Billy Moyer completed a successful World of Outlaws/American Late Model Association season with his sixth feature win of the campaign at Lebanon (Mo.) I-44 Speedway on Saturday, August 27. Larry Phillips paced the first 10 laps before giving way to Ken Essary on round 11. A broken right front shock then knocked Essary out of the lead on lap 22 allowing Moyer to charge to the top. Once in front, Moyer, driving the Larry Shaw #21 Camaro, was unstoppable and won by a comfortable five-car lengths. Ray Guss Jr., Ken Essary, Larry Phillips and Rex McCroskey followed Moyer across the finish line. 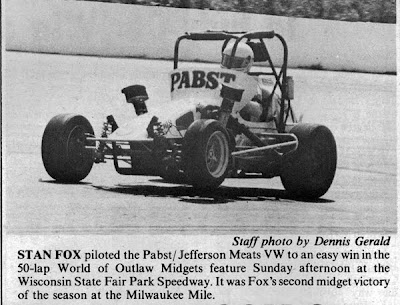 1983 – Stan Fox swept the midget action at the Wisconsin State Fair Park Speedway this season by winning the 50-lap World of Outlaws Midgets (WOOM) feature on Sunday afternoon, August 28. Fox, who established a WOOM qualification mark of 32.161 seconds (11.397 mph), began the afternoon on the sixth row, in the partially inverted, three abreast field of 36 midgets. Swiftly making his way through the field, Fox took the top spot on lap 24 when race leader Bob Cicconi's gearbox broke. The Janesville, Wis., driver was never seriously threatened after that, picked up the checkers and the $2,000 first prize. Jim McLean of Crest Hill, Ill., Jim Gates of Plano, Ill., Bill Engelhart of Madison, Wis., and Larry Hillerud of Arlington Heights, Ill., rounded out the top five that saw only 10 cars still on the race track at the finish. 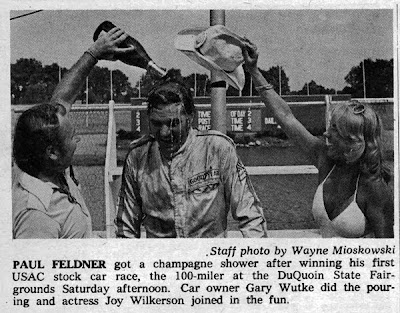 1977 – Veteran Paul Feldner scored his first victory ever on the USAC stock car circuit, August 28, by winning the division’s 100-mile race at the Du Quoin (Ill.) Fairgrounds. Feldner inherited the top spot on lap 53 when race leader Charlie Glotzbach pitted during a yellow flag. With his 1974 Charger running to perfection, Feldner opened up a comfortable advantage and won by half a straightaway. Feldner averaged 73.968 miles per hour in recording the victory, despite the frequent appearance of the caution flag. Sal Tovella, starting 17th in the 28-car field, took runner-up honors, while Jim Hurlbert, Bay Darnell and Glotzbach followed.