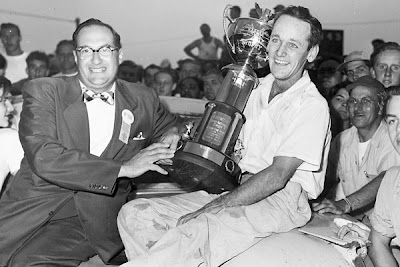 Tommy Thompson is all smiles in victory lane after winning the 250-mile NASCAR Grand National race at the Michigan State Fairgrounds.


The race came down to Thompson battling with Curtis Turner. With 25 laps left in the event, Turner attempted a slide job and the two collided spinning into the track’s wooden retaining wall. Joe Eubanks of Spartansburg, S.C., driving a 1950 Oldsmobile 88, grabbed the lead while the two struggled to recover from the crash. Eubanks however appeared to be unaware that he was leading and continued driving at a very conservative pace. Thompson recovered and ran down Eubanks. Turner’s 1951 Oldsmobile retired from the race with a damaged radiator.


Thompson passed Eubanks for the lead with seven laps remaining. He established a 37 second lead in the remaining laps for his first win in the NASCAR Grand National Division and was awarded $5,000 prize money.

A field of 54 cars started the four hour grind on the 1-mile dirt track. Thompson covered the distance in 4 hours, 21 minutes and 28 seconds, beating out Eubanks by 37 seconds at the finish.

Marshall Teague of Daytona, Fla., who had the pole position at the start of the 250-mile race, didn’t finish in the money as engine trouble forced him out midway through the race.