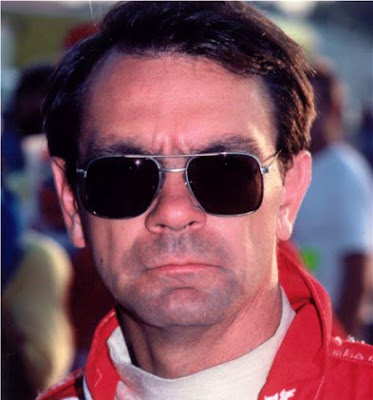 It took a single-file lineup to get the race under way after two red flag incidents stopped the race before a single lap was completed. Both mishaps occurred approaching the first turn.

On the attempted restart, Mel Kenyon flipped going into turn one, and Jim Keeker hit Kenyon's car while in the air. A seven-car pileup resulted to halt the race. The other cars involved included Tony Elliott, Roger McCluskey Jr., Dean Billings, Kurt Mayhew and Bill Luse.

No one was injured with only the cars of Keeker and Kenyon unable to continue the race. That spoiled Kenyon's chance to collect the $200 bonus which promoter Bill Lipkey had posted if a driver was able to win both feature events in the two-race series which started Tuesday at Fort Wayne's Baer Field Raceway.

In the meantime, Gamester's crew was able to repair his car in the infield, and he was able to get back in the race at the rear of the single-file restart.

Doty led the first lap, but Vogler got past him in the backstretch coming out of turn two and led the rest of the way to pick up his 118th career USAC feature triumph in impressive fashion.

It was Vogler's night. He was fast qualifier with a clocking of 16.962 seconds on a heavy track. The veteran Indianapolis hotshoe won the first eight-lap heat race with a USAC record time of 2:14.68, breaking his old mark of 2:21 set at Kokomo in 1978, then won the feature, lapping all but four cars in the process.

Vogler, who leads the USAC National point’s race, won by more than a straightaway, followed by Doty, Terry Wente, Kevin Olson and Gamester, the only cars still on the lead lap. Rounding out the top 10 were Allan Barr, McCluskey, Jim Hines, Mayhew and Billings.

Vogler started at the rear of the seven-car first heat which Hines led on the first lap. Johnny Parsons and Vogler got past Hines on the second circuit. Parsons broke a cam-shaft and stalled in turn four after three laps, and Vogler took the lead and pulled away to a full-straightaway, record-setting victory.

Warsaw's Elliott, a winner of five sprint features here this season, led the first five laps of the second heat before Kenyon slipped past on the sixth circuit. Kenyon held off Elliott and Gamester in a close finish.

In the third heat, McCluskey led the first six laps with Doty challenging him on every lap. Doty grabbed the lead on lap seven and held on to win the race.

Keeker led all 10 laps and won by half a straightaway to capture the B-Main semi-feature.