This Week in History - Springfield Mile 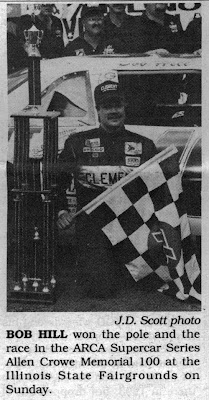 1994 – Bob Hill was ready to settle for second place in the Allen Crowe Memorial 100 when leader Bob Keselowski ran out of fuel with a lap and a half remaining, leaving Hill to drive to the ARCA Supercar Series victory, Sunday, August 21, on the Illinois State Fairgrounds dirt mile. Keselowski inherited the lead from Gary Bradberry when a lap 75 accident took out the leader. Keselowski roared out to a 10-car length advantage until his Chrysler lurched and started to fall backwards on the backstretch, allowing Hill to blast by for the lead and win by three-car lengths over Bobby Bowsher. “I guess my biggest reaction is surprise,” Hill responded after being asked how he felt about his first career ARCA Supercar Series win. 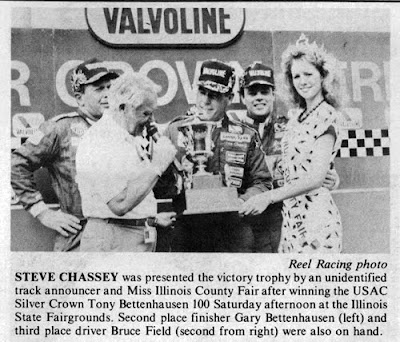 1988 – Steve Chassey grabbed the lead on round 95 and went on to win the USAC Silver Crown Series’ Tony Bettenhausen 100, Saturday, August 20, at the Illinois State Fairgrounds. Kenny Jacobs paced the first 73 laps of the event before Jack Hewitt charged in front on very next circuit. Hewitt remained on top for the next 16 laps before Andy Hillenburg took command. Hillenburg’s reign lasted only five laps before Chassey surged ahead to stay. Chassey took the checkers ahead of Gary Bettenhausen, Bruce Field, Hillenburg and Steve Butler.

1983 – Gary Bettenhausen overcame 101-degree temperatures to score a wire-to-wire victory in the Tony Bettenhausen Memorial 100-mile USAC Silver Crown event at the Springfield Mile on August 20. Steve Chassey earned the pole position with a record 31.932 second (120.740 mph) tour of the dirt oval. However, Bettenhausen, who started alongside Chassey on the front row, bolted into the lead on the opening round and never relinquished the top spot. At one point, he held a 12-second advantage, only to have a late caution allow his competition to close the gap. Bettenhausen went on to finish three seconds ahead of runner-up Ron Shuman. Ken Schrader, Larry Rice and Chuck Gurney rounded out the top five finishers. 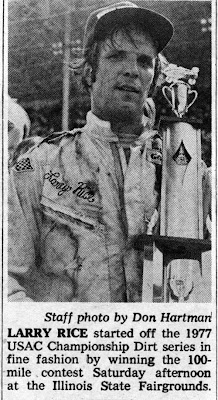 1977 – Larry Rice scored his first career victory in USAC’s Championship Dirt division, Saturday afternoon, August 20, by capturing the Tony Bettenhausen 100 at the Illinois State Fairgrounds. Pole-sitter Thad Dosher, Johnny Parsons and Jackie Howerton each took a turn at the top spot early in the event before misfortune sent all of them to the infield for the day, allowing Rice to inherit the top spot. Rice, who won the USAC midget driving crown in 1973, took the checkered ahead of Sheldon Kinser, Bill Engelhart, James McElreath and Chuck Gurney.