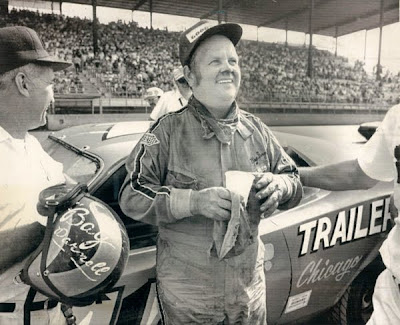 Bay Darnell is all smiles after winning the Indiana State Century for USAC stock cars at the Indiana State Fairgrounds. It was Darnell's first career USAC stock car victory. - Kyle Ealy Collection
Indianapolis, Ind. (August 25, 1974) - Bay Darnell, a little round man with a big smile, has finally stepped into the winner’s circle after 13 years of trying.
The 43-year-old driver from Deerfield, Ill., outdueled the top names in U.S. Auto Club stock car racing to win Sunday’s 11th annual Indiana State Fair Century 100-miler and about $4,500. He did it driving the wrong car, heavily taped, because of a broken shoulder and fighting the burden of never having won a feature race in 13 years on the USAC tour.
Darnell, known as “The Great Pumpkin” because of the bright orange driving suit he wears when racing, said, “I can't even tell you how I felt when I saw the checkered flag out there. There were just too many things to think about.” “I won with a 1974 Dodge and it’s my asphalt (track) car. I totaled out my dirt car and broke my shoulder last week at Springfield, Illinois, and I didn’t even think I’d be here,” Darnell said.
But he credited a “miracle doctor” with patching him up well enough to go a grueling 100 laps on the Indiana State Fairgrounds’ mile dirt track. The shoulder “didn’t give me any trouble. I didn’t even feel it once we got started. I put this thick padding in back of me in the seat. It was so comfortable. It’s never coming out of there.”
USAC stock car division leader Norm Nelson finished second, followed by defending USAC stock car champion Butch Hartman and former USAC national driving champion Roger McCluskey. Paul Feldner was fifth.
The 5-foot-8, 200-pound Darnell started sixth in the 28-car field. Hartman held the lead for the first 44 laps, Nelson kept it until McCluskey look it for one lap while Nelson pitted on lap 69, then Nelson held it again until Darnell took over for good on lap 95.
Results –
1. Bay Darnell
2. Norm Nelson
3. Butch Hartman
4. Roger McCluskey
5. Paul Feldner
6. John Schultz
7. Ramo Stott
8. Rick O’ Brien
9. Frank Freda
10. Ralph Latham
11. Sal Tovella
12. George Coonrod
13. Ernie Derr
14. Steve Drake
15. Paul Sizemore
16. Joe Booher
17. Mickey Flora
18. Keith Ploughe
19. Chuck McWilliams
20. Ralph Baker
21. Jim Marshall
22. Bob Schippers
23. Don Lamb
24. Ken Rowley
25. Larry Cope
26. Jigger Sirois
27. M.J. McBride
28. Jim Hurlburt