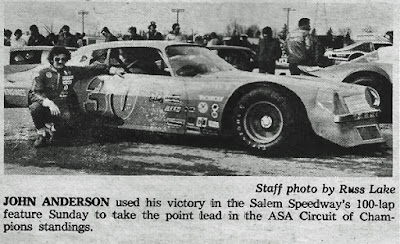 Salem, Ind. (April 30, 1978) – John Anderson of Massillon, Ohio, drove a flawless race Sunday afternoon at Salem Speedway, to score his first American Speed Association stock car win of the season, leading the last 80 circuits of the 100-lap, caution-free race.
Anderson set a new record of 29 minutes and 56 seconds (108.195 miles per hour) on the .54-mile high-banked paved oval.
Don Gregory of Columbus, Ohio, was five seconds back in second place and Bob Sensiba of Middleville, Mich., was third.
For the second time in 24 hours, the ASA drivers completed a 100-lap event with no caution flags as Bob Senneker of Dorr, Mich., won a 100-lapper at Winchester (Ind.) Speedway on Saturday afternoon.
Anderson’s Camaro never faltered in the feature as he moved from his sixth starting spot in the 24-car field to pass early leader Gregory, who momentarily slowed after Ken Harrison blew an engine on lap 19, producing plenty of smoke, but no oil on the racing surface.


Anderson’s victory earned him $1,625 from a $9,650 purse. Despite rain in virtually every area surrounding the track, 5,093 fans braved the elements, and were rewarded with partly sunny skies and temperatures in the 60s.