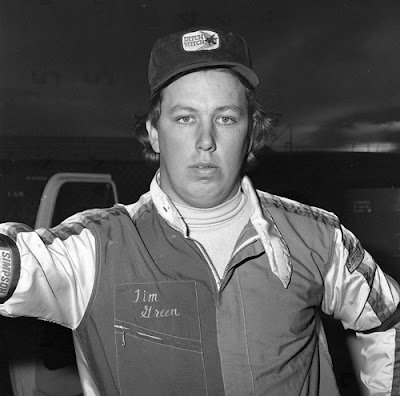 Odessa, Mo. (April 15, 1984) — Race fans at I-70 Speedway knew that Sunday’s World of Outlaws sprint car feature was not going to be just another 30-lap race when “The Wolf,” Doug Wolfgang, Sioux Falls, S.D., rolled his sprinter in turn three before he even crossed the starting line. One hour and 19 minutes later, Tim Green, Sacramento, Ca., had his first World of Outlaw victory since 1980, and a check for $6,000.
Brad Doty, Orrville, Ohio, jumped into the lead on the first lap followed by Steve Kinser, Bloomington, Ind., Ron Shuman, Mesa, Ariz., and Green. The yellow flag came out on lap 12 as Sammy Swindell, Bartlett, Tenn., spun in turn one.
On the restart, Swindell spun again, this time in turn three. As Swindell was spinning he was clipped by Linus Mack, East Grand Forks, Minn., who did a series of barrel rolls.
As the cars were lining up for the restart the rains came. After the rain delay, the sprinters returned to the track with Green passing Doty on the restart. On lap 18, Kinser got around Doty for second and set his sights on Green.
Kinser caught Green in traffic on lap 25 and moved into first Green who was running with no brakes the last six laps of the race, had to back off in traffic. Lapped traffic behind them, Green went back into first place on the next lap.
“Once I got by the lapped cars, I knew I had it won,” said Green. But it wasn’t over yet. Bobby Davis Jr., Memphis, Tenn., blew a right rear tire coming out of turn four, doing a series of flips along the front straight away wall. The red flag brought the race to a halt setting up a two-lap trophy dash to the finish. The dash was all Green’s as he was pulling away from Kinser as the checkered flag fell.