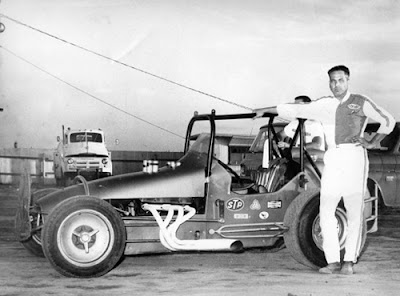 West Chester, Ohio (April 4, 1970) – Jerry Blundy took advantage of a yellow flag with 10 lap to go to power past Don Hewitt on the restart and capture the 40-lap International Motor Contest Association sprint car race on a chilly Saturday afternoon at Tri-County Speedway.
The first-ever appearance of the IMCA sprint cars on the half-mile dirt track also saw records fall for every distance race except the yellow flag slowed feature. New 1-lap, 5-lap and 10-lap marks were established.
Blundy, of Galesburg, Ill., started fifth in the 20-car field that had been narrowed down from the 35 entrants, and he was only fifth when an accident on lap 30 dropped back the three cars immediately ahead of him and provided him a golden opportunity.
Blundy took advantage of his chance, shooting past Hewitt, the pacesetter for 30 laps, as the green flag restarted the action. From there, Blundy stretched his advantage, taking the checkered flag with a healthy margin over Dick Gaines. Bill Utz, who ran consistently up front, finished third.
Darl Harrison, the 1969 IMCA national champion, moved extremely well in the feature after poor qualifying runs, and he was battling Butch Wilkerson for second when Wilkerson spun on lap 30. Wilkerson would collect Harrison and Jay Woodside with him in the spinout.
Only Harrison was able to restart the event, and with 10 laps remaining, he pulled back up through the field to finish fourth, nipping Hewitt for that spot on the final lap.
Hewitt, the surprise early leader, ran a fine race for the first 30 laps as he repulsed successive challenges from Wilkerson, Jan Opperman, Dick Sutcliffe, Jay Woodside and Wilkerson again. He would slow noticeably in the final 10 circuits, however, and drop to fifth.
Sutcliffe, the fast qualifier at 20.03 seconds, which was a new IMCA record for a half-mile dirt track, had maneuvered to second place and seemed to be well on his way to passing Hewitt when he spun out and was forced to retire on lap 17.
Jan Opperman, who was holding a strong third throughout the early stages of the race, also saw his chances go out when he spun a lap later.
Chuck Lynch, Benny Rapp, Rick Ferkel, Luke Easter and Bobby Sitz rounded out the top-10 finishers.