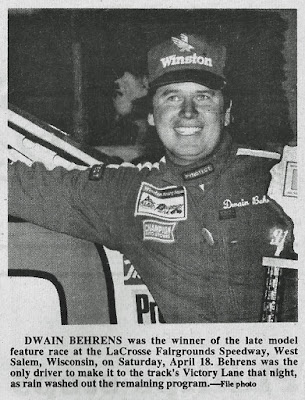 West Salem, Wis. (April 18, 1992) – The early season dominance continued in 1992 as Dwain Behrens slid inside of Shawn Pfaff on lap 22 of the NASCAR late model feature and took the opening win of the Winston Racing Series at the La Crosse Fairgrounds Speedway.
Last season, Ted Smokestad took the opening win at La Crosse as several Minnesota drivers took the long drive from the Twin Cities for opening night and Behrens duplicated that this year.
Mike Tuma led from the pole position for the first 11 circuits before Pfaff completed his hard-charging drive from the back of the pack to take the lead. Pfaff pulled away for several laps, before Behrens made his way through the field and started closing the gap on Pfaff.
Behrens nearly made the pass on lap 17, but the third yellow of the race came out when Smokestad spun and hit the wall in turn two. Four lap later Behrens took the inside lane on turn one and two and made the pass for the win.