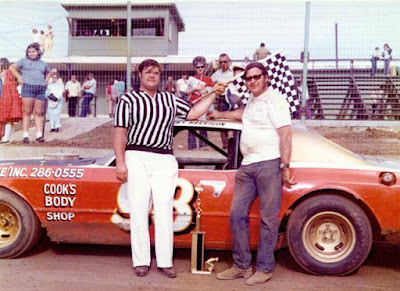 
Topeka, Kan. (April 23, 1973) – Gerry Harrison, who had nothing but trouble at the Mid America Fairgrounds on Saturday night, had nothing but good fortune on Sunday afternoon, winning the 50-lap late model stock car feature with his 1972 Monte Carlo in front all the way.
Saturday night’s winner, Tom Frasher of Jefferson City, Mo., finished second in his Camaro and was the recipient of a $100 bonus for being the top place finisher in the two days of racing.
Harrison, who won the pole position with a time 17.46 seconds, beat Jim Hagar of Liberty, Mo., through the first two turns on the first lap and kept his car well ahead of the rest of the field for the remaining 49 circuits.
There were about half as many cars (25) and half as many fans on hand for the afternoon of racing on the quarter-mile as there were for the Saturday night program on the half-mile.
As was the case on Saturday night, not many of the starters finished the feature. Twenty cars took the green flag and only seven were left at the finish. Mechanical troubles were the main issues as only minor spinouts brought out the yellow flag.
Gary Jellison of Topeka, Kan., who started the feature five points ahead of Frasher in the contest for the extra money, moved up to second place early in the chase and held it until lap 22 when the driveshaft let go on his Plymouth.
Meanwhile, back in the pack, Frasher was waiting for the field to thin before making his move. He was in seventh place when he started his move to the front on lap 18.
He had moved to fifth when Jellison dropped out and took over third passing Jerre Wichman of Kansas City on lap 29. Four laps later, Wichman came to a halt in front of the grandstand and was out of action.