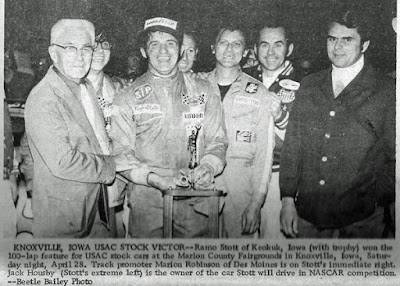 Knoxville, Iowa (April 28, 1973) – Ramo Stott of Keokuk, Iowa, finally got his car together at 3:30 pm on Saturday and then worried well into the night whether everything was secure.
It was, and Stott won the 100-lap United States Auto Club late model stock car feature at the Marion County Fairgrounds before a crowd of 11,000. Stott earned $1,600 for the victory.
Ramo had been working on his 1973 Plymouth for nearly 20 hours a day since Monday and his effort to get it ready for the four-race program.
“The car worked just fine,” Stott remarked as he signed autographs for fans. “I worked until 3:30 this morning, then went to bed until 8 o’clock and then I returned to work on the car.”


“I tried to sleep on the trip to Knoxville, but I’m kept thinking, ‘Did I do this? Did I get that bolt tight? Will everything stay together’”


Stott took the lead on lap 10 and was in command the rest of the way, pulling away from most of the field.


Hartman would manage to pass Stott later during the race, but it was quickly ruled that Hartman was still a lap down. Ramo dueled with Hartman for a few laps but decided to back off.


“I didn’t think he could make up that big of a deficit but I didn’t like seeing him go by either. However, I thought if I tried to push the car needlessly, something might happen and I lose the race.”


Stott would finish nearly a half-mile ahead of Bowsher with the first four cars completing all 100 laps.


Don White of Keokuk, Iowa, would get the jump when the green flag waved but it was Ernie Derr passing White between turns one and two on the first lap. White would go around Ernie on lap 3 and lead until Stott took command on lap 10.


Overheating seemed to be a problem for a few drivers. Derrr said his car was running hot towards the end and he had to let up and allow Bowsher to slip by for second while Derr settled for third.


“I had two choices,” Derr said, “I could try and get my position back and possibly burn all of the hoses off or cruise along and get a high finish.”