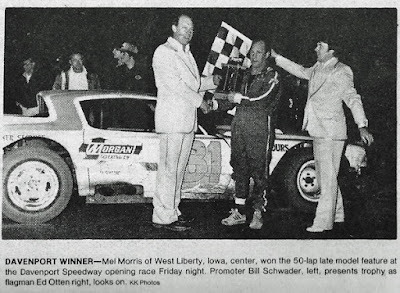 Davenport, Iowa (April 14, 1978) – Mel Morris of West Liberty, Iowa, took the lead in the 50-lap late model feature and held on to win the $700 first prize money. The racing program was the season opener at the Mississippi Valley Fairgrounds’ half-mile.
It wasn’t an easy victory for Morris, who was challenged during the last 10 laps by John Simenec of Rock Island, Ill. Simenec, who started dead last in the 22-car field, put on an exciting driving exhibition that had the chilled crowd on it’s feet.
Simenec hadn’t even qualified for the feature event, but inherited the last starting spot when Bill Zwanziger of Waterloo, Iowa, withdrew due to mechanical issues.
Simenec wasn’t the only challenger. Such drivers as Ronnie Weedon of Pleasant Valley, Iowa, and Verlin Eaker of Mechanicsville, Iowa, were vying for the top prize as well.
Bill Martin of Council Bluffs, Iowa, challenged Morris early on in the 25-lapper. Martin was finally forced to retire when an overheated engine sent him to the pit area.
A total of 62 cars turned out for the “Iowa Spring Sizzler”, promoter Bill Schwader’s initiation at the Davenport track. The first track to open in Iowa, drew a crowd of over 4,000. 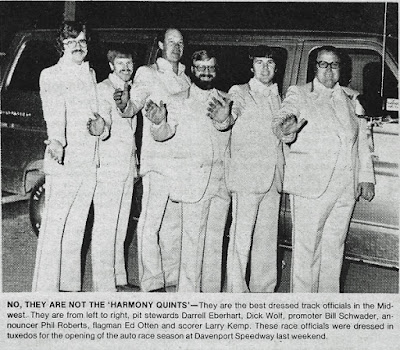