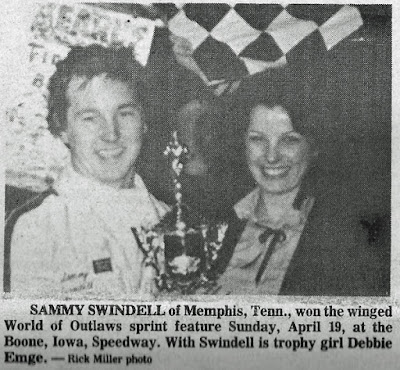 Boone, Iowa (April 19,1981) – Sammy Swindell of West Memphis, Tenn., won the 30-lap World of Outlaws winged sprint car feature Sunday night at the quarter-mile Boone Speedway.
In taking the win, Swindell not only survived a seventh lap collision, he won in suspenseful fashion, taking the lead on the 27th circuit in the main event. He captured the lead from young Danny Smith of Hendersonville, Tenn., driving a sprinter owned by singing star Kenny Rogers.
Smith held on to finish second before a crowd estimated at 4,000 despite overcast skies and threatening weather.
Steve Kinser of Bloomington, Ind., who won the ‘Outlaw’ main at Knoxville, Iowa, on Saturday night, was third and Doug Wolfgang of Sioux Falls, S.D., who won the ‘Outlaw’ feature on Friday at Lakeside Speedway in Kansas City, took fourth. Tim Green of Carmichael, Calif., rounded out the top five.
Kinser established a new track record for the second straight as he lowered the Boone standard to 14.417 seconds. The old record was 14.85 seconds set by Wolfgang in 1978.
It was Swindell’s second World of Outlaws win of the season and his eighth overall. He pocketed $2,100 for the victory while Smith took home $1,300 for his runner-up finish.
After two nights of numerous flips, including a fatality at Knoxville, there were no serious incidents during the Boone program nobody got upside down during the evening.