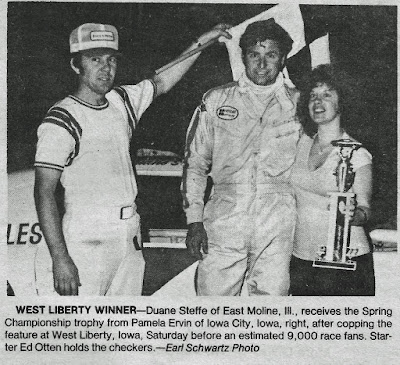 West Liberty, Iowa (April 16, 1977) – An all-time record crowd of 9,000 race fans saw stock car racing at its best at the Spring Championship opener at the West Liberty Fairgrounds.
With ideal weather, a track that was in excellent shape, and 81 drivers on hand, all eager for their share of the $5,000 plus purse, the evening was jam-packed with action and excitement.
Drivers from all over Iowa, Illinois, Minnesota, Wisconsin, Nebraska, and Canada made the call for the season opener. But it was Duane Steffe of Colona, Ill, who took home the big money by winning the 25-lap late model feature.
Heading the list of thrills was seeing the track record broke, not just once, but four times, during qualifying. Three drivers broke the record of 24.21 seconds set by Curt Hansen of Dike, Iowa, in 1975.  Ken Walton of Cedar Rapids, Iowa, lowered Hansen’s time twice, and now holds the new track record at West Liberty. He toured the half-mile in 23.90 seconds in his first lap and then bettered his mark the second time around, in 23.69 seconds. Also breaking the record was Ray Guss Jr. of Milan, Ill., who timed in at 23.98 seconds and Tom Hearst of Wilton, Iowa, with a time of 24.11 seconds.
Steffe has been a regular racing contender at West Liberty for several seasons. Last season he finished third in points. He would start the feature on the outside of the first row and take the lead on the first lap. He would successfully hold off charges from polesitter Gary Webb of Davenport, Iowa and Steve Keppler of Marion, Iowa, who were both on his heels in the early laps.
After several laps, Ray Guss and Tom Hearst would move into the third and fourth spots, joining the battle for the lead. Doing superb driving in only his second time out in his new Camaro, Steffe held off his challengers and kept the lead throughout.
Ken Walton’s new Camaro, in its premier appearance, became overheated towards the end of the race and he would lose several positions before the checkered flag waved. Mike Niffenegger of Kalona, Iowa, the 1976 point leader, didn’t finish at the front of the pack, as he was having mechanical issues as well with his new Camaro.
Late model heat winners were Jim Burbridge of Delhi, Iowa, Bill Zwanziger of Waterloo, Iowa, Ron Hemsted of Lone Tree, Iowa, Gary Crawford of Independence, Iowa and Don Hoffman of Des Moines. Hemsted also won the consolation.