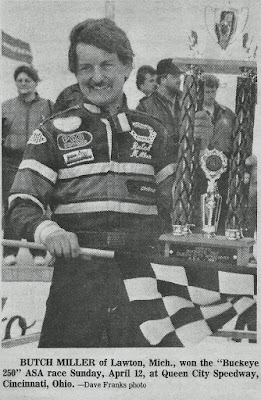 West Chester, Ohio (April 12, 1987) – The outcome was the same at the 1986 season opener – Butch Miller of Coopersville, Mich., driving his Camaro to victory in the ASA Racing Series ‘Buckeye 250’ at Queen City Speedway.
But how the script had changed with this year’s staging featuring a whole new cast characters in the leading role.
Miller was strong all day, leading and running in the top five all day after qualifying seventh quickest the day before. He had the tires, handling, and the power at the end of the race to pull away from the rest of the field.
But the story was much more than that.  Second place went to Joe Shear of Beloit, Wis., in his best ASA performance in nearly five years. Third was Harold Fair of Detroit, Mich., who was anything but impressive on Saturday afternoon, earning his way into the ‘250’ field by winning the last chance race. Fourth place went to Kent Stauffer of Elyria, Ohio, who made his debut in a Ford by recording his first career top five finish.
Others came from the tail of the field with little problem, such as; Bob Senneker of Dorr, Mich., who started 20th; Stauffer, who stared 30th; and Fair, starting 21st.
Fair worked his way to the front by lap 129, pacing the field until lap 148 when Dick Trickle of Wisconsin Rapids, Wis., took over. From that point, however, Fair was never lower than sixth.
Despite 15 cautions for 84 circuits, mostly for minor spins, a total of 27 cars from the 32-field, were running at the finish.