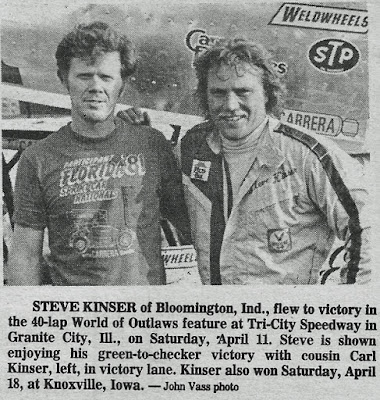 Granite City, Ill. (April 11, 1981) – Steve Kinser of Bloomington, Ind., made it two in a row at Tri-City Speedway in Granite City as he won both ends of the two-day World of Outlaws race meet Friday and Saturday.
Kinser earned the pole position for Saturday’s 40-lap feature by setting fast time on Friday and he took the lead at the drop of the green and led all the way to the win. Rick Ferkel of Findlay, Ohio, was second and Doug Wolfgang of Sioux Falls, S.D., was third.
The 24-car field went the entire 40-lap distance without a caution flag and only six cars dropped out with mechanical problems.
While Saturday’s race was with wings, Friday’s was without, but it made little difference to Kinser as he won the 25-lap feature on opening night. He took the lead after 12 laps were down as he passed Tim Green of Carmichael, Calif.
Saturday heats were won by Sammy Swindell of West Memphis, Tenn., Mike Brooks of Knoxville, Iowa, Chuck Amati of Freeman Spur, Ill., Lee James of Sacramento, Calif., and Doug Wolfgang of Sioux Falls, S.D./ Dean Shirley of Middletown, Ill., won the semi-feature.
Friday heat winners were Wolfgang, Danny Smith of Hendersonville, Tenn., Ken Schrader of Fenton, Mo., Swindell, and Shirley. Joe McCarthy of El Paso, Tex., won the semi-feature.