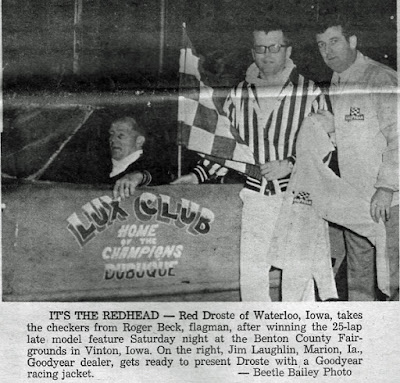 Vinton, Iowa (April 19, 1969) – The Old Master, labeled by many experts as the best short track driver in the Midwest, showed ‘em how it’s done Saturday night on the Benton County Fairgrounds quarter-mile.
Red Droste of Waterloo, Iowa, the 1968 champion at both Cedar Rapids and Waterloo, tromped his 1968 Chevelle to victory three times in the late model stock car races before a capacity crowd that braved near-freezing weather to view the season opener.
Droste banked $300 for winning the feature and pocketed another $50 for setting fast time.
The redhead gave fans a preview of what was to come when he wheeled his Chevelle to fast time honors, touring the quarter-mile in 17.73 seconds. He followed that up with a squeaker in the fast heat and a fairly easy win in the 25-lap main event.
A crowd estimated at 1,700 watched the races as did some of the area drivers. Bill McDonough of Cedar Rapids, Iowa, Bill Zwanziger of Waterloo, Iowa and Cal Swanson of Reinbeck, Iowa, were all present but were unable to complete their cars in time for the spring championship.
Chub Liebe of Oelwein, Iowa, was unable to make it because of work yet to be done on his car and Ron Weedon of Pleasant Valley, Iowa, the 1968 East Moline and Davenport champion, was kept at home because of floodwaters in the area.
Jimmy Schmuecker, a Vinton, Iowa favorite, didn’t even get time to re-ramp his 1965 Ford. His transmission locked up during hot lap and the popular charger was forced to watch the action from the pit area.
Del Stokke of Ames, Iowa, driving a 1957 Chevrolet, took an early lead in the feature, holding Ed Sanger of Waterloo, Iowa, Danny Clement of Rhoades, Iowa and Droste at bay for the first nine laps until Sanger powered past him into the top spot.
Droste would also move past Stokke as well and was hot on Sanger’s tailpipe in no time, waiting for the young pilot to falter. Sanger would hold the top spot until the 17th lap, then give Droste the break he was looking for. Going into turns one and two, Sanger’s car would drift high, allowing Droste to go low and power by for the lead.
From there on out it was merely a battle for second place as Droste drove a beautiful race for the remaining eight circuits and his super power plant made the task seem easy.
Droste would take the checkers ahead of Sanger, Danny Clement, Tom Hughes of Monticello, Iowa and Dale DeFrance of Marshalltown, Iowa.
Al Iben of Monticello, Iowa, Clement and Droste would score heat wins while Glen Martin of Independence, Iowa, won the 12-lap semi-main.