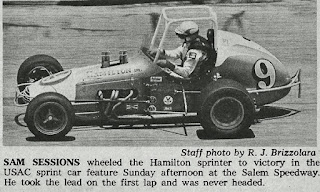 Salem, Ind. (April 27, 1975) – Sam Sessions, driving the Gene Hamilton sprinter, captured the 40-lap USAC sprint car feature at the high-banked Salem Speedway on Sunday afternoon.
Sessions started on the outside of the front row and charged into the lead on the first lap’s first turn. He took a commanding lead over Bill Cassella, Joe Saldana and Larry Dickson and stayed in front all the way to the checkered flag.
The 40 laps were run caution free and Sessions was able to establish a new track record of 12 minutes and 4 seconds, for a speed of 99.425 mile per hour.
Cassella, Saldana, Dickson and Bill Engelhart were locked into a tight battle the entire distance with Dickson slowly picking off each one to take runner-up honors. Cassella was running fourth on lap 39 but lost an engine with less than half a lap to go. He would coast across the finish line in eighth place.
The win for Sessions was his first since July of 1974 when he copped a feature win at New Bremen, Ohio. The win moved Sessions into fifth place in the point standings.
Dickson, with his second-place finish, catapulted to first place in the point standings with 147 points to Joe Saldana’s 146.
Defending point champion Pancho Carter, who passed up Salem in favor of a race in Trenton, N.J., fell from second to fourth in the standings.