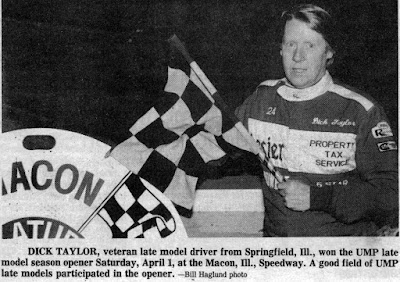 (April 1, 1989) – The Mighty Macon Speedway entered its 44th season Saturday with an excellent crowd on hand and a good field of cars, despite the chilly weather.

After a pair of cautions at the start of the UMP late model feature, Rick Standridge opened up a slight advantage over Dick Taylor at the drop of the green. Taylor poured it on, closing the gap and finally overtaking Standridge on lap 6 for the lead that he would never relinquish as he went on to victory capturing the 25-lap main event. He was followed by a had-charging Glenn Bradley, Tom Reints, Standridge and Jim Rarick.


The IMCA modifieds joined the racing program this season for the season for the first time along with the UMP late models, sportsman and bomber divisions, making it the first new class in 10 years. 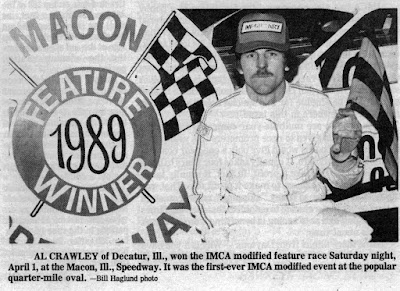 
Dennis VanderMeersch made it look easy driving his multi-colored #25 to victory leading every lap of the 15-lap sportsman feature.


The bomber feature saw Jeff Winters capitalize on a couple of early accidents to win the 10-lap event.