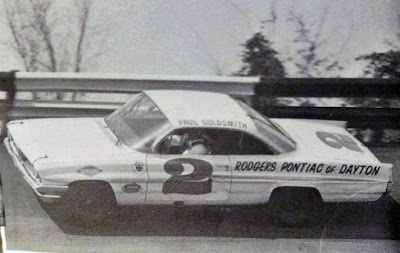 Dayton, Ohio (April 23, 1961) – Paul Goldsmith of St. Clair Shores, Mich., won his third USAC late model stock car race of the season, taking the 100-lap feature with an average of 89.87 miles per hour. Goldsmith, who had won previously at Phoenix and Los Angeles, collected $750 for his efforts.
Don White of Keokuk, Iowa, who holds the one-lap record at Dayton Speedway, which he set last season, chased Goldsmith across the finish line in a close finish. A lap behind were Bill Shoulders of Waukegan, Ill., Whitey Johnson of Hammond, Ind., and Les Snow of Bloomington, Ill.
Twenty-two cars started the feature with 18 finishing. Time for the 100-lap feature was 36 minutes and 2 seconds.
Goldsmith, driving a 1961 Pontiac, was in second place behind Bill Cheesbourg of Tucson, Ariz., from lap seven to lap 38. Cheesebourg started to slow and Goldsmith scooted by a lap later. Cheesbourg would retire four laps later with a broken axle. Goldsmith was never headed after that.