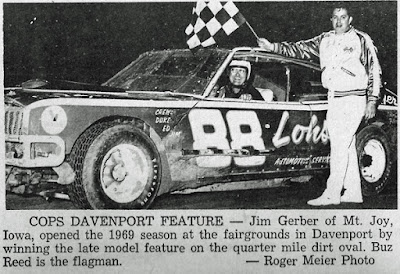 Davenport, Iowa (April 25, 1969) – Jim Gerber of Mt. Joy, Iowa won the 30-lap season opener at the Mississippi Valley Fairgrounds on Friday night. Gerber piloted a 1967 Dodge Charger.
Red Droste of Waterloo, Iowa, took quick time in qualifying, took third in the semi-main and placed fourth in the main event.
However, Droste’s car was ruled illegal and he was asked not to come back with his 1968 Chevelle.
In the dispute, it was pointed out that promoter Homer Melton had ruled out 1968 Chevelles because the wheelbase is only 112 inches whereas the rules call for 115-inch minimum.
Don Herbst, owner of Droste’s late model explained that he contacted Melton to see if the car was legal to compete if they stretched the wheelbase to 115 inches from the dash wall on back.
“Melton gave me the okay and they knew this before we entered the races on Friday,” Herbst remarked.
The ruling on stretching the wheelbase was asked because Herbst wanted to meet rule specifications for the Independence Racing Association which operates races at Independence and Waterloo, Iowa, Droste’s hometown.
The Independence Racing Association allows 108-inch wheelbase cars to compete if the wheelbase is stretched to 155 inches from the dash wall on back.
Following Gerber to the finish line in the late model feature was 1968 track champion Ron Weedon of Pleasant Valley, Iowa, and John Connolly of Delhi, Iowa. Droste and Don Bohlander of Glasford, Ill., rounded out the top five.