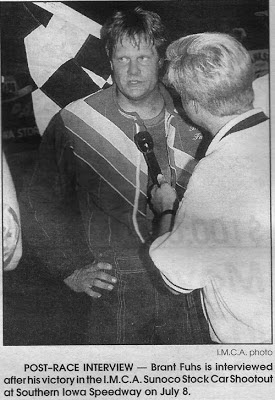 July 8 – Brent Fuhs didn’t make the field for the IMCA Sunoco Stock Car Shootout until the final qualifying event. Then he went out and won the race, and $2,500. Fuhs, from Eldon, Iowa, took the checkered flag in the fourth “B” feature Thursday night at Southern Iowa Speedway in Oskaloosa, and started 20th in the 25-lap main event. Working his way quickly through the field, he was in contention for the lead by lap 18. Fuhs crossed the finish line in a virtual dead heat with Mike Robinson of Moravia, Iowa, the next three times around the big half-mile before taking command for the final four circuits. Robinson would falter in the remaining laps to finish fifth. Ron Ver Beek of Oskaloosa, who started 21st, passed Bobby Greiner of Ottumwa, Iowa, on the final lap to secure second while Greiner settled for third. Jim Brown of Fremont, Iowa, took fourth.
July 8 – Joe Kosiski passed pole-sitter Greg Golden on lap 9 and went on to win the 40-lap Patrick Pinney Contractors Late Model Shootout at Interstate Speedway in Park Jefferson, S.D. The fourth edition of the shootout saw great action throughout the field on the 3/10-mile high bank dirt oval.


July 9 – Nate Thiesse of Brainerd, Minn., has made only a handful of starts in the NASCAR Winston Racing Series late models, but it was the finish that proved impressive as he won the 40-lap feature at I-94 Speedway in Sauk Centre, Minn., on Friday evening.
July 9 – Three drivers scored their first feature wins of the season at Rapids Speedway in Rock Rapids, Iowa, on Friday. In the 360 sprints, Randy Droescher of Larchwood, Iowa, led all 18 laps to top the 18-car field. In the late model stock car feature, it appeared that the previous week’s winner, Terry Dieren of Brandon, S.D., was well on his way to his second straight victory when handling issues sent him to the pit area, allowing Dale Furby of Sioux Falls, S.D., to take the lead and his first win. Although Chad Overgaard of Luverne, Minn., was the point’s leader in the sportsman division, he had yet to see victory lane this season. That situation changed as he came from last to first in a thrilling contest.


July 9 – Steve Boley of West Liberty, Iowa, posted his fifth NASCAR Winston Racing Series late model victory of 1999 at Farley (Iowa) Speedway to stay in the season point’s championship hunt. Boley worked his way through the field from his 10th starting position to nab the top spot from Scott Hereen of Forreston, Ill., on lap 12. He would hold off Jeff Aikey of Cedar Falls, Iowa, to seal the win. Hereen would settle for third while Rick Wendling of Hazelton, Iowa, took fourth.  The modifieds saw a double dose of action as Ron Barker of Dubuque, Iowa, won the make-up feature from July 2 and Scott Hogan of Vinton, Iowa, won the regular main event. Jeremiah Hurst of Dubuque (pro stock) and Jim Brokus of Dubuque (bomber) were other winners.
July 9 – Tommy Myer was able to fight off some of the bad luck that seemed to dog him all year and broke loose from the IMCA modified field to take a commanding lead and impressive victory at Hancock County Speedway in Britt, Iowa, on Friday night. Jim Ringham was another fresh face in the winner’s circle taking the hobby stock feature win. He started on the pole and held off all challenges.


July 9 – Craig Jacobs of Des Moines continued to dominate the IMCA late models at the Iowa State Fair Speedway in Des Moines by winning his fifth feature of the season on Friday night. Jacobs started eighth and passed David Stanton for the lead on lap 7. Darrel DeFrance of Marshalltown, Iowa, finished second. Tim St. Arnold of Des Moines was able to pick up his third checkered of the season, winning the 360 sprint car feature over Josh Higday, also of Des Moines. In other action, Pat Fagen of Des Moines won the IMCA modified main event, Mark Elliot of Webster City, Iowa, scored the IMCA stock car victory and Rick Gladson of Des Moines and John Davis of Altoona, Iowa, won IMCA hobby stock features.
July 10 – Mike Klinkhammer of West Branch, Iowa, posted his second win of the season in NASCAR Winston Racing Series late model action at West Liberty (Iowa) Raceway on Saturday. Klinkhammer started the 25-lap event in the fourth position but held the lead by the time the field completed the first lap and never look back. Robbie Verbeck of Annawan, Ill., also dominated his division, taking the lead on the first lap of the modified feature and rocketing away to a huge lead. 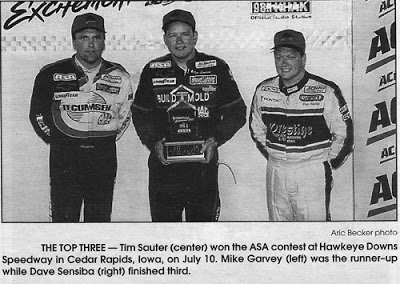 July 10 – Tim Sauter of Necedah, Wis., emerged victorious in the American Speed Association (ASA) “Pontiac Excitement 250” in front of a near capacity crowd at Hawkeye Downs Speedway in Cedar Rapids, Iowa, on Saturday evening. Sauter, a second generation driver, led the final 100 laps and crossed the finish line .358 seconds ahead of Mike Garvey of Muskegon, Mich., to earn his second career ASA victory and his second of the ’99 season. Dave Sensiba of Middleville, Mich., came in third, Jimmie Johnson of El Cajon, Calif., took fourth and polesitter Mike Miller of Woodstock, Ga., rounded out the top five.
July 10 – Thad Trump of Kahoka, Ill., was a man on a mission as he won the IMCA late model feature at Lee County Speedway in Donnellson, Iowa, on Saturday. Trump started in the fifth row but made his way through the field quickly and passed race leader Jeremy Townsend of Bloomfield, Iowa, at the mid-point of the 25-lap contest. From there he checked out, winning by almost a straight-away at the checkers. Terry Schlipman of Mendon, Ill., was runner-up, followed by Mark Burgtorf of Quincy, Ill., Townsend, Mike Smith of Jewell, Iowa. Burgtorf pulled double duty this evening and was rewarded by winning the IMCA modified feature. Starting in the sixth row, Burgtorf took advantage of numerous cautions to move up through the field where he eventually overtook Tony Fraise of Montrose, Iowa, for the lead and the win. Dave Hemsted of Lone Tree, Iowa, won the IMCA stock car main event and Tim Tucker of Lomax, Ill., was the hobby stock winner.


July 10 – Tri-City Speedway’s defending NASCAR Winston Racing Series champion Terry McClintock grabbed his second late model victory of the season on midseason championship night at Granite City, Ill. McClintock started on the outside of the second row and used the high side to get to the front, holding off Terry James at the finish. Tim Barrett led all 20 circuits in picking up his fourth victory of the season in the NASCAR modified division and B.J. Seets continued his success in the street stocks, picking up a feature win as well.
July 10 – Curt Martin of Independence, Iowa, continued his dominance of the IMCA late model class at his hometown track of Independence Motor Speedway as he stormed through the field from his 10th starting position to take the lead from Ben Schaefer of Raymond, Iowa, with only two laps to go. In IMCA modified action, Darin Duffy of Hazelton, Iowa, charged to the front of the pack on the first lap and never looked back in taking the win. Tom Schmitt of Independence took the IMCA stock car feature win and Shawn Fisher of Garrison, Iowa, won an exciting pro stock main event.


July 10 – Steve Francis of Ashland, Ky., picked up his second United Dirt Track Racing Association (UDTRA) win of the season with a victory in the “Ironman 100” at Florence (Ky.) Speedway on Saturday. Francis held off Skip Arp of Georgetown, Tenn., and Wendell Wallace of Batesville, Ark., for the $15,000 top prize.  Dale McDowell of Rossville, Ga., looked like he was well on his way to his sixth series win of the season with less than 15 circuits to go but on lap 89, McDowell slowed with mechanical issues and was out of the race, finishing 18th.
July 11 – Jeff Danielson may not have many laps to his credit at Greenbelt Speedway in Eldora, Iowa, but he made each one count. In only his second time at Greenbelt this season, the Duncombe, Iowa, driver led the majority of the 12-lap hobby stock feature and held off several late-race challenges to seal the deal on his first victory of the season. In other action, Ed Anderson (IMCA stock car) and Troy Folkerts (IMCA modified) continued to pad their win totals at Greenbelt for the season.


July 11 – Mid-season championship night at East Moline (Ill.) Speedway on Sunday evening saw Todd Bennett of Peoria, Ill., go flag-to-flag in the IMCA late model contest for his third win in a row and fourth of the season. Dennis LaVeine of Burlington, Iowa, scored his third modified win of the season and Steve Gustaf of Silvis, Ill., won his second bomber feature of the year.
July 11 – Micah Schliemann of Sioux Falls, S.D. topped the field to score his first-ever outlaw sprint car feature win during mid-season championship night at Huset’s Speedway in Brandon, S.D., on Sunday evening. He battled Skip Jackson of Sydney, Aust., early, Leonard Lee of Milo, Iowa, in the mid-stages and Dennis Moore Jr., of Grinnell, Iowa, late, but came on home first. The 360 sprinters saw a driver take his first win of the year as well, as Terry Karn of Tea, S.D., rode the high side of the track to victory. After winning his first feature of the year last week, Wayne Kruger of Luverne, Minn., wasted no time in scoring his second victory as he led the entire distance in the late model stock car division. 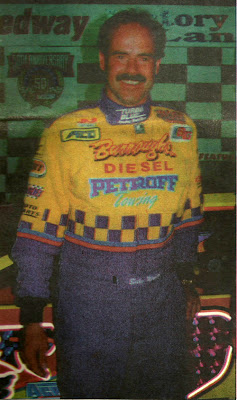 Billy Moyer Jr. - Dennis Krieger Imagery
July 12 – In the world of dirt late model racing, there was very little Billy Moyer had not accomplished. With his 10 victories in the UMP Summer Nationals tour, another feather in his cap was added. UMP officials confirmed that Moyer had won a $100,000 bonus for his efforts. The bonus was given to any driver who won half of the tour’s 23 events. However, with a number of rainouts recorded, Moyer was able to earn the bonus with fewer victories. Moyer scored his first victory of the tour at Boswell, Ind., on June 29. Then, over the 4th of July weekend, racked up victories at I-55 Speedway in Pevely, Mo., Highland (Ill.) Speedway and LaSalle (Ill.) Speedway. He would score his fourth consecutive win as the series pulled into Hales Corner Speedway in Franklin, Wis. He would win on July 7 at Spoon River Speedway in Canton, Ill., July 9 at Farmer City (Ill.) Raceway, July 10 at Fairbury (Ill.) Speedway, July 11 at Davenport (Iowa) Speedway and July 12 at Farley (Iowa) Speedway.