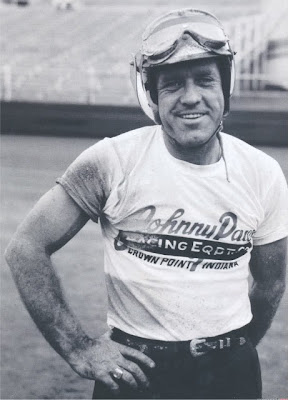 Bob Tattersall
(July 23, 1969) – Bob Tattersall, the high flying point leader for the USAC National Midget Championship, once again increased his lead for the crown as Mel Kenyon experienced more bad luck. Tattersall would score the victory in the 30-lap feature at the Marion County Fairgrounds on Wednesday night.


For Tattersall, it was his second win this week and his fourth in five races. Kenyon’s bad luck came in the first heat as he was attempting to pass Danny Frye. Frye’s engine quit momentarily and Kenyon’s car bounced off the right rear and sailed into the fence head-on. The car then spun taking out the front end and damaging the rear end as well.


In the main event that evening, Merle Bettenhausen chased Tattersall across the finish line some four car lengths behind and just ahead of Dave Strickland. Les Scott held down fourth with Kenyon taking fifth behind the wheel of Sonny Ates’ car.


Les Scott took the lead on the green as “Tat” jumped from his sixth starting position to fourth. Strickland moved into the top spot on the second lap with Tattersall second and Scott dropping back to third. Tattersall would sail past Strickland down the backstretch and would lead the rest of the remaining laps. The victory tied him with Kenyon for career wins with Bob Wente one victory behind.


Bill Englehart went to the pits on the third lap as Kenyon moved through traffic. With 10 laps in the books, Merle Bettenhausen had moved into second behind Tattersall but was unable to close the gap. Strickland was third with Scott, Rob Greentree and Bob Wente fighting for fourth. Arnie Knepper, Mel Cornett and Kenyon fought for seventh.


Tattersall was lapping slower cars by the 12th circuit and when the checkers flew, the Streator, , veteran was well in front, with Bettenhausen and Strickland separated by five lapped cars. Kenyon would get by Wente on lap 27 for his fifth place finish.


Wente set fast time, clocking in at 24.38 seconds on the big half-mile, well off the mark he set himself a year ago at 2.22 seconds.