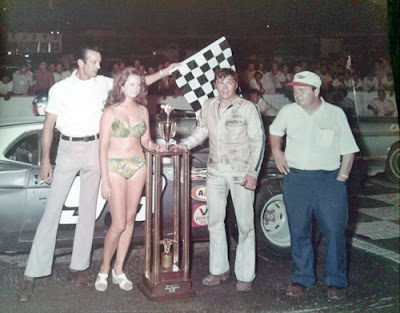 Dick Trickle proudly poses with his trophy after winning the 300-lapper at I-70 Speedway.


Odessa, Mo. (July 22, 1972) – Dick Trickle of Wisconsin Rapids, Wis., struck for the second consecutive year on Saturday to rake in the big money at I-70 Speedway’s third annual 300-lap National Championship for late model stock cars before a crowd of more than 8,500.

Trickle pushed his purple and white #99 A&W Root Beer 1970 Mustang past early leader Dave Wall of Kansas City a third of the way through the long-endurance contest and seemed to be well on his way to an easy victory.

But on lap 298, Trickle’s engine began to smoke and as he took the white flag to begin the final tour, his engine blew. He held his foot to the gas pedal and drove the final half-mile with smoke pouring from his car. With all power gone, he crossed the finish line with only the car’s nose visible. Wall, driving a 1970 Chevelle, finished second, one lap behind.

Wall shot into the lead from his pole position followed by Tom Maier of Midland, Mich., as the 40-car field from 11 states took the green flag to begin the 300-lap grind.

As on Friday night during preliminaries, Wall set a blistering pace. Maier dropped out after 20 laps after brushing the wall on the backstretch leaving second place to John Prior. Fellow Michiganders Bob Senneker and Gary Fedewa were also victims of early mechanical issues.

By lap 40 Trickle was running third after starting 14th and shot past John Prior to take over second on lap 63.

On lap 64 Joe Wallace triggered a five-car crash in turn three when he spun and was rammed by Roy McClellan and Wayne Stallsworth of Denver, Colo. Jim Hager and Harold Young then piled into wreckage to bring out the red flag and halting the field.

On the restart, Wall resumed his hectic pace with Trickle riding his bumper. The pair dueled for 40 laps until Wall was trapped behind slower traffic in turn two and Trickle seized the opportunity, scooting underneath and to take command going down the backstretch on lap 105. From then on, it was clearly Trickle’s race.

Other than the crash on lap 64, the race was slowed six times by minor spins. Twenty-three of the original 40 starters were still running as Trickle took the checkered flag.