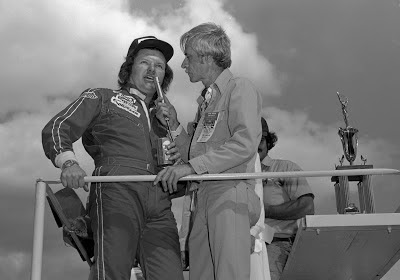 Miller 200 winner Dave Watson is interviewed in victory lane by announcer Jack Baker. - Stan Kalwasinski Photo
(July 10, 1977) - Dave Watson scored one of the most popular victories and caused more excitement than State Fair Park has seen in many a moon Sunday when he won the Miller 200-mile late model stock car race.


The 31-year-old driver from , who has starred on and short tracks since 1970, had to overcome a one-lap penalty for passing on the yellow but still roared back to beat the likes of Bobby Allison by five seconds at the checkered flag.


Don White was third, 23 seconds behind Watson and Bay Darnell was fourth, 29 seconds - almost a full mile behind the winner.


The race was slowed by six yellow flags, but it was the final two, on the 123rd and 147th laps that helped Watson escape from the position his one lap penalty put him in and move on to his victory.


Watson had been black-flagged on lap 58 and made to sit out a lap for passing 10 cars on the backstretch under the yellow flag. The decision was unpopular and brought a large number of boos from the grandstand, which seemed partial to the driver from .


In the race Sunday, Watson ran well early, putting his Buick Skylark in the lead for two laps when Unser's Camaro overheated after 11 laps. He led again from laps 26 to 52 until Bob Brevak spun in flames down the main straight bringing out the yellow which resulted in Watson's penalty.


“I thought I ought to be able to pass cars I had already passed and had a couple of laps down,” said Watson with such conviction it made one forget he'd already had seven years of very good racing experience.


“We get the USAC (United Slates. Auto Club) bulletins sent to us," said Watson's car owner, Dave Deppe of Baraboo. “It's our job to read them and to know what the rules are. But here's Dave, on the mile track for the first time, and he sees people ahead of him passing under the yellow so he does it, too.”


Except USAC is on the lookout for those upstarts who show up the regular drivers and Watson was caught. “I talked to Dave (Deppe) on our radios about what I should do,” Watson said, “and he said I should keep pushing and go as hard as I could without completely abusing the car.”


But the car withstood all the punishment and Watson kept inching up, gaining most of the penalty back on a couple of yellow flags at laps 63 and 87. He finally caught White's 1977 Dodge Aspen kit car and unlapped himself on the 104th circuit around the one-mile State Fair Pair track.


Then he got a break when a yellow came out on the 123rd lap for some unaccounted debris on the track. He used it to close down well on the leaders.


When Sal Tovella blew the engine on the main straight on lap 147 just after Allison passed him for the lead, it brought out the final yellow. That was all Watson needed. He already had passed Necedah’s Jim Sauter and Darnell to move into fourth. When Tovella blew, Watson was in third.


It took five laps to clear the oil from Tovella's engine off the track and when the green came back out on the 153rd lap, Watson took out after the second-place White, passing him on the next lap.


lison, who was racing with a very upset stomach, still was a little tougher for Watson but he caught the NASCAR legend on the 158th lap and pulled away for his victory, the first for a Wisconsin driver at Milwaukee since Norm Nelson won in 1966 and the first for a Buick anywhere since longer than anyone at State Fair Park could remember.


The Skylark has a 350-cubic inch Chevrolet engine which is legal because General Motors said a few months ago, after the flap about an Oldsmobile customer finding a Chevy engine in his Olds, that any 350 engine in a GM car was a GM engine, not an Olds or a Pontiac or a Chevrolet engine.


Since all the racing development has been done on Chevrolet engines, and since you used to have to race the same engine as your car body's sheet metal work resembled, everyone has raced Chevrolet.


“When they changed that rule, we thought we might just as well build a Buick or an Olds or a Pontiac and have something different,” Deppe said with a grin. “We've probably got the fastest Buick in captivity.”


Watson said the car probably was at least the best-handling Buick in captivity. “It just ran super all day long,” he said. “I could go any place I wanted. I could go outside of 'em. I could go inside.”


If Watson's car was handling wherever he wanted it to, Allison was less than satisfied with his. “We just weren't setup all the way,” Allison said. “We used the tires up and we were hoping we could get by without doing that. would make a few changes to run here again.”


Allison said he felt like making a few changes in his stomach after he woke up with the same intestinal-type illness that has slowed him twice earlier this season. He started the race but, when Unser went out early, Allison asked Unser to stand by in case he couldn't continue. When Brevak's yellow came out, Unser was standing by but not called on.


Of Watson, Allison said, “He was tough. Boy he was ready to go. He looked good in practice yesterday and early in the race he got behind on the penalty but he made it up so that automatically indicated to us that he was a superstar.”


Sauter, another state short-track racer also looked good, wheeling his big old 1974 Charger around with all the pony cars to a strong sixth-place finish.