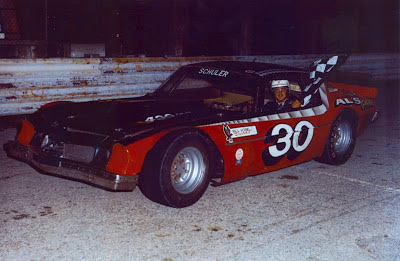 (July 11, 1976) – When a new driver comes onto the stock car racing scene he usually joins the stream of traffic or drowns.


Larry Schuler, a 23-year-old , race car pilot began racing four years ago and immediately became a winner on tracks near his home.


“I guess I was a little wild when I first started, but I won more races than most rookies,” Schuler said after a Thursday night stock car race at the Wisconsin International Raceway in Kaukauna.


He had just finished eighth in the late model feature event and watched the figure eight cars squeal steam and shove their way around the track, concluding the night’s activities.


“Now, those guys are really nuts,” Schuler proclaimed with a grin as two of the figure eight competitors crashed together.


He lifted a soft drink to his mouth and gulped down a mouthful of the soda. “I had problems tonight, but it’s still fun racing here. Most of the guys drive real clean,” he said.


When asked about his win in the first race of the “Red, White and Blue” state championship series, Schuler shrugged his shoulders and replied, “Everything just fell together, I guess. It’s something that might never happen again.”


In that June event, Schuler whipped his 1976 Camaro around the top stock car drivers in the , including Dick Trickle, a national record holder. “I knew Dick (Trickle) was right behind me, so I couldn’t relax at all,” Schuler noted.


Since that time Schuler has won a total of 20 feature events on tracks, including four Fox River Racing Club victories at WIR on Thursday nights. He is currently tied with Rich Somers, the 1974 state champion, for the point leadership in the Thursday night races. Both drivers have 252 points.


Schuler leads the point standings by wide margins at the Grundy County Speedway in , and at the Illiana Motor Speedway in


At both tracks he has completely dominated the competition, having accumulated almost twice as many points as his nearest rivals.


At the and raceways there is no rule regarding weight, but when Schuler competes in the “Red, White and Blue” series his car must weigh 3,300 pounds because the car is powered by a 440 cubic inch engine. Cars with smaller engines are required to weigh less, due to a rule adopted to equalize the competition.


Schuler has always been a hard-charger. He drives so furiously that at times his brakes begin to heat up and disintegrate. On one occasion at Kaukauna, Schuler was chasing a rival around the half-mile paved oval and drove deeper and deeper into the corner each lap. Soon the sparks began to drop from underneath the car and he was black-flagged from the race.


“It wasn’t running right tonight and I was trying to make it up in the turns. I guess I ate up the brakes,” he said, dropping his tools for a second in the pit area following the race.


Schuler is looking forward to the next showdown with the drivers on Sunday afternoon, July 18 as the state championship continues. “There wasn’t any cheating the last time. Enough of the other drivers were around at the scale to see to that,” he said.


The lead foot, whose car is dubbed the “Junkyard Dog,” holds a 590 to 510 lead in the state championship point standings over Trickle, who has raced at many of the nation’s major ovals, including .