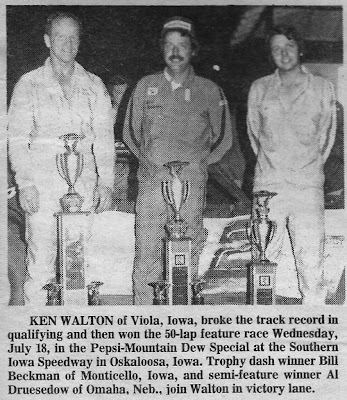 July 18 – The Pepsi-Mountain Dew Special at the Southern Iowa Speedway in Oskaloosa, Iowa, is becoming a Ken Walton benefit. Walton, who won the race in 1978, repeated that win on Wednesday before a packed grandstand of race-goers – and he did it in grand fashion. Starting in the fifth spot on the grid, The Viola, Iowa, hot shoe moved rapidly to the front, passing Bill Zwanziger of Waterloo, Iowa, on lap 12, never to be headed again for the final 36 circuits. Zwanziger held on to the second spot and Dick Schiltz of Waterloo, Iowa finished third, passing Gary Crawford of Independence, Iowa in the final five laps. Crawford and Denny Osborn of Cedar Falls, Iowa, rounded out the top five finishers.


July 19 – North Dakota speedways have been very kind to Des Moines, Iowa, standout Don Hoffman. The opening night of the North Dakota State Fair Championships was no exception. Hoffman, who won a 100-lapper in West Fargo, N.D., in June, survived two caution flags and a like number of red flags before winning the 50-lap feature over the best field of cars to ever appear at the Fairgrounds Speedway. The triumph, which netted Hoffman $2,000, was not an easy one, despite the fact that he had a rather comfortable lead over runner-up Clayton Petersen of Grand Island, Neb., at the finish. Hoffman, who started ninth in the 31-car field, had to work his way through traffic before collecting the lead on lap 37 when pacesetter Leon Plank of Mondovi, Wis., slowed with mechanical problems. Following Hoffman and Petersen to the line was Tom Nesbitt of Thunder Bay, Ontario, Jim Bruggeman of White Bear Lake, Minn., and Steve Egersdorf of St. Paul, Minn.
July 20 – Jim Buhman of Bettendorf, Iowa, was surprised but delighted when he was presented the checkered flag for winning the 35-lap mid-season championship for the limited late model division at Hawkeye Raceway in Blue Grass, Iowa, on Friday night. Point leader Larry Armstrong of Moline, Ill., led the entire race, but got tangled with Denny Stewart of Davenport, Iowa, who was second, Jim Gerber of Long Grove, Iowa, who was third, before crossing the finish line. Buhman cleared the three-car fracas and took the checkers first before a stunned crowd. 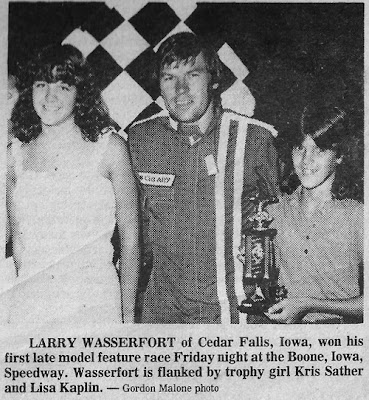 July 20 – Larry Wasserfort of Waterloo, Iowa, grabbed his first feature Boone (Iowa) Speedway feature win of the season on Friday night. Wasserfort took over the lead on lap 8 from Steve Shannon of Norwalk, Iowa, and held it the rest of the way to the checkers. Des Moines’ Bill Davis put the pressure on Wasserfort along with Arnie Braland of Boone for several laps but Davis’ car developed mechanical issues towards the end of the race and Braland’s ride lost its power steering and he barely managed to hold on to the runner-up position over Dan Nesteby of Waterloo, Iowa. Bill Rice of Des Moines took fourth while Shannon settled for fifth. 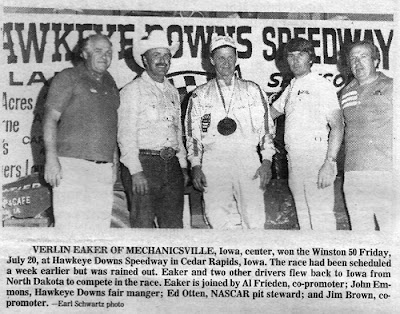 July 20 – A day that included a flight from North Dakota to Minneapolis and then a car ride from Minneapolis to Cedar Rapids, Iowa, paid off for three Iowa late model drivers at Hawkeye Downs Speedway on Friday night. The three – Verlin Eaker of Mechanicsville, Ed Sanger of Waterloo, and Gary Crawford of Independence – had driven in the first of three programs at Minot, N.D., on Thursday night.  The rain-delayed “Winston 50” late model special attracted a great field of cars, including the three weary travelers who were driving borrowed cars. Verlin Eaker, the winner, drove a Camaro normally powered by R.J. Bruggeman of Dubuque, Iowa. Crawford, who finished fourth, drove the car piloted regularly by A.E. Mayner of Winthrop, Iowa. Sanger, who was scored in sixth, wheeled the Camaro of Tom Bartholomew of Waterloo. 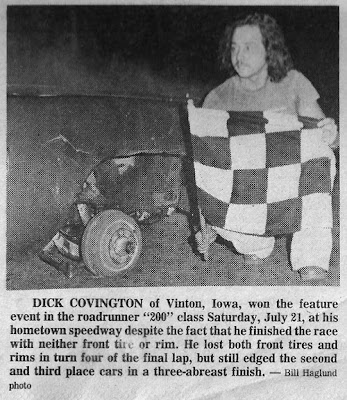 July 21 – Waterloo, Iowa’s Mike Krall started the day with no engine in his IMCA modified and Dick Covington of Vinton, Iowa, ended it with no front tires or rims, but both won feature events at Vinton (Iowa) Speedway on Saturday night. Krall’s first engine in his Vega modified was claimed for $300 under the rules following Thursday’s event at the annual Benton County Fair. The new engine sputtered and coughed its way through the heat event, which ended when Krall lost his drive shaft. Not outdone by adversity, he came back in the feature to wrap up his second consecutive checkered flag of the season. Covington, who had earlier won his heat race, was leading the feature event by a sizeable margin over Steve Hendryx of Mount Auburn, Iowa, when his tires and rims came off the car on the last lap. Keeping control of the car, despite having only rear tires, Covington limped towards the finish line with Hendryx closing quickly.
July 21 - The young redhead from Clarence Hills, Ill., Art “Fireball” Fehrman, scored and impressive victory in the special 50-lap DeKalb County Championship for super late models at Sycamore (Ill.) Speedway on Saturday night. Fehrman took the lead from Roy Jelinek of Carpentersville, Ill., on lap 8 and was never headed after that. The real battle was for second place with defending track champion Larry Mosher of Belvedere, Ill., and John Engelkens of Morrison, Ill., dueling for the latter part of the race before Engelkens prevailed.
July 21 – An accident at Knoxville (Iowa) Raceway on Saturday night claimed the life of a race car driver – the third this month – and injured two track officials. Dick Stoneking of Oquawka, Ill., was killed when his sprint car flipped on the front straightaway during the B-main and crashed into the flag stand. Flagman Gary Johnson of Colfax, Iowa, and his assistant, Steve Koons of Knoxville, were injured when the impact to the stand threw them onto the track. Neither was run over and both were taken to Collins Memorial Hospital where they were listed in good condition. The accident occurred when Stoneking, running at the back of the pack while coming around the curve to complete the second lap, went out of control and began flipping down the front stretch. His car began climbing the track fence and crashed into the flag stand.  Stoneking, 26, had been racing for six years and the last two years had been a regular at the Knoxville half-mile. He was pronounced dead at Collins Memorial.
July 22 – Tom Bartholomew of Waterloo, Iowa, became the fifth double late model winner of the season at Tunis Speedway in Waterloo on Sunday evening as he drove to a convincing victory in the 25-lap feature. Bartholomew made the early portions of the race a runaway, claiming the lead by the end of the first lap and building that margin up by more than a straightaway when the red flag came out on lap 15. Bartholomew rebuilt that lead of several car lengths before the checkered flag waved. The real battle in the late model main was for second place, with Dan Nesteby of Waterloo prevailing in a dogfight with Tom Fitzpatrick of Gilbertville, Iowa. In other action, Larry Schmidt of New Hampton, Iowa, won the sportsman feature while Vern Jackson of Waterloo took honors in the roadrunner feature.
July 22 – It took the better part of the year, but Darrell Zweifel of Rochester, Minn., finally won his first late model feature in front of a record crowd at Dodge County Speedway in Kasson, Minn., on Sunday. Zweifel led the last 10 circuits after battling John Foegen of Winona, Minn., throughout  the 25-lap contest. Bob Saterdalen of Oronoco, Minn., took third, followed by Bob Lawrence of St. Paul and Lance Matthees of Winona.
July 22 – Pulling a maneuver few thought possible, Gary Crawford of Independence, Iowa, shot past Ed Sanger of Waterloo, Iowa,  in the 50-lap feature event to capture the main event as well as the North Dakota State Fair Championship in Minot,. N.D. Crawford passed Sanger on the outside coming out of turn four to take the top spot on lap 45 and cruised to victory, his second in as many nights, to claim the overall title by 22 points over Sanger and Don Hoffman, Thursday night’s winner. Verlin Eaker, the 44-year-old chauffeur from Mechanicsville, Iowa, finished fourth in the run for the fair crown followed by 23-year-old Jim Bruggeman of White Bear Lake, Minn.
July 23 – Veteran pilot Bill Utz of Sedalia, Mo., added to his list of victories by winning the 30-lap winged sprint car race at Saline County Speedway in Marshall, Mo., on Sunday night. The program was sanctioned by National Speedways Contest Association (NSCA). Utz worked through the field quickly from his fourth row starting spot, taking the lead by lap 5 and going on to win by nearly half a lap. Tim Green of Sacramento, Calif., earned runner-up honors while Shane Carson of Oklahoma City, Bob Thoman of Higginsville, Mo., and Gene Gennetten of Parkville, Mo., rounded out the top five. 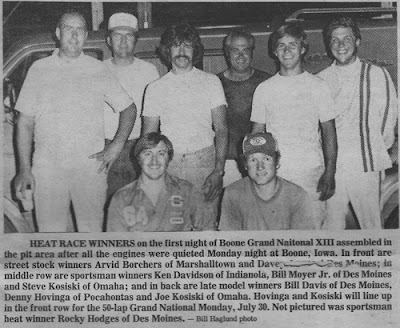 July 23 – A drizzle that began Monday and grew in intensity on Tuesday forced postponement of the Boone Grand National XIII at Boone (Iowa) Speedway. Because of the amount of the water in the infield, promoter Jim Majors moved the final night to July 30. Before the rains came Monday night, the track was super fast for qualifying heat races and Denny Hovinga of Pocahontas, Iowa, who won the third heat race and later annexed the first position race, earned the pole position for next week’s race. Joe Kosiski of Omaha earned the outside front row with his victory in the second heat race and second position race. Bill Davis of Des Moines was the first heat winner. In sportsman action, Billy Moyer Jr. of Des Moines, 19-year-old Steve Kosiski of Omaha, Rocky Hodges of Des Moines, and Ken Davidson of Indianola were all heat winners.


July 24 – Ed Sanger of Waterloo, Iowa, won the annual “Cheater’s Day” at the Brown County Fairgrounds in Aberdeen, S.D., on Tuesday night. Sanger pocketed $999.99 for his feature win and added another $55.55 for his heat win. The top three finishers in the main event were all Iowa drivers a Sanger was followed across the finish line by Don Hoffman of Des Moines and Dick Schiltz of Waterloo, Iowa.