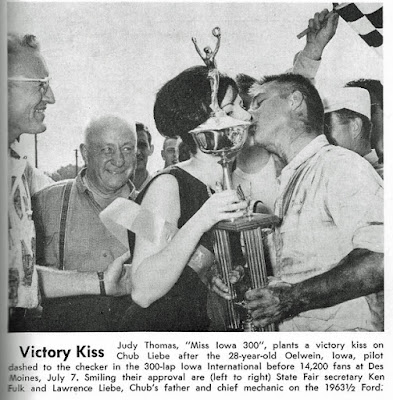 Des Moines, Iowa (July 7, 1963) - Jules “Chub” Liebe drove his 1963 Ford to the biggest late model stock victory in his career Sunday when he took the checkered flag for the 150-mile victory at the Iowa International in Des Moines.


Liebe set a new record when he gunned his high-powered, auto around the course in two hours, 30 minutes and 59 seconds, to break the old mark of two hours, 39 minutes and 49 seconds set by Ramo Stott of in 1961.


“This is the biggest one ever,” commented Liebe following the triumph. “There’s only one other IMCA race that's any bigger and that's the 350 in at the state fair.”


“I wasn't real confident going into Sunday's race,” admitted the Oelwein driver. “Thursday things were real tough at . Racing conditions there were terrible and the car wasn't running too good. Everything was tops Sunday and the most important thing – the car stayed together. That was the difference.”


The 27-year old driver took the lead on the 143rd lap and raced to the checkered flag. |


“We had a little trouble near the finish,” says Liebe. “I had to make my third pit stop for two quarts of oil. But everything turned out alright.”


“It was running faster Sunday than it has been,” asserts Liebe. He was fifth in the time trials Sunday morning.


Stott, driving a 1963 , led until the 148th lap, when he lost a wheel and crashed into the wall. He was not injured. He is the current point leader in IMCA competition. Ernie Derr, former IMCA national champion, was unable to compete due to his costly accident Thursday at .


Former Iowan Dwayne (Tiny) 's 1963 Ford developed trouble and was not entered in the 300-lap race. But the Harlan native drove the 1963 Ford of Darrell Dake of for the first 118 laps. Dake finished eighth.


An estimated 14,200 persons witnessed the race. The victory marked the first of the year for Liebe and his red Ford.