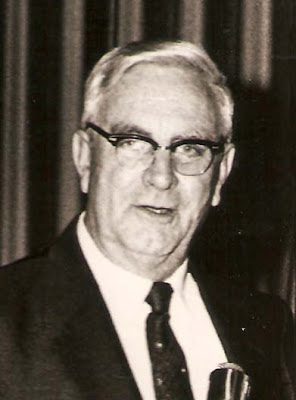 George Marshman
, (July 6, 1977) - I'm sure that all racing fans have seen at least one demolition derby in their time. The inventor of the demo derby is none other than George Marshman of Yerkes, Penn.


George got the brainstorm while he was promoting races at Pottstown, Pa. During the racing program an accident occurred right in front of the fans. Well, the little round man noticed how the fans surrounded the drivers and cars. He decided right then and there that he would run a race where the idea was to eliminate the other car by crashing into it. The year that this happened was 1951 and it has been a crowd pleaser since then.


The name that George gave this race wasn't demolition derby. He called it a “wreck-em race”. It was about a year later that Larry Mendelson of Islip, New York came to George and told him that he would like to take the show on the road. It was a huge success as a road show and that's when George Marshman began to run a derby at each of his tracks that he promoted. Larry Mendelson called his show a destruction derby and George later began to call it a demolition derby.


The derby that George just promoted at the Lions Fourth of July Celebration was his 1,827th derby. This is his 26th year as a derby promoter and he has totaled over 83,000 cars in his derbies. The safety factor for the drivers in a demo derby is great. In 1,827 demo derbies George has had only two reportable injuries.


George Marshman is known for more than just demolition derbies. He was at one time a great dirt track racer. The , which is the forerunner to the present USAC organization, was dominated by George Marshman. He won the championship by a wide margin.


George Marshman is a member of a dwindling fraternity. He has done taking else other than auto racing to earn a living. George became a racing driver in 1931. It all happened when the driver of the car that Marshman was the mechanic on didn't show up. He jumped at the chance to drive and drove until he was involved in a very serious accident at the Florida State Fair in Tampa, Florida in 1950. He flipped a championship car from one end of the front straightaway to the other. Thus ended a great driving career.


George Marshman had many great moments as a driver. He and Joie Chitwood did all the driving for two great racing pictures. The pictures were "Big Wheel" and "The Crowd Roars". The star of both pictures was none other than a very young Clark Gable.


Marshman never competed at Indianapolis. However, he had many offers to drive there but turned them down. George told me that the reason that he turned them down was that he could make more money at the dirt plants than he could at Indy. The drive at Indy would mean that he would have to be there a solid month with a very slim hope of victory. I'm sure that you as a race fan will agree with George's thinking if you are aware of the odds of winning Indy at that time in history.


George Marshman has always had a little bit of the promoter in him. He used to drive sprinters, midgets, and championship cars around dirt ovals blindfolded. I asked him how he did such a feat and he wouldn't tell me the secret. However, he did tell me how many other people used to do it. They would put alcohol on their foreheads and Vaseline under their eyes and cheeks. Then they would go to the track and the promoter or somebody out of the stands would hand the driver two silver dollars and he would place them over his eyes.


Then the other person would place a blindfold over his eyes and lead him to the car. Well, what would happen is that once the driver is placed in the car he would close his eyes very tight and open them a few times. The result was that the silver dollars would slip just enough that the driver could see just a little bit of daylight straight down from under the blindfold. Now I wouldn't advise anyone to try it. Remember, George Marshman is a promoter.


George and I talked of his many injuries and he stated that Evil Knevil has nothing over him. He said that Evil boasts about having broken 31 bones in his body. “That's nothing,” said George. “I've broken that many at one time.” He said that he doesn't feel like an old man at age 66. He just feels like a young man with many things wrong.


George Marshman never went to Indy. However his son Bobby made it. Bobby was George's only son and was a great competitor. Bobby Marshman was a man with great talent and great things were expected for him. Bobby led the 1963 Indianapolis 500 for many laps until he was involved in an accident with rookie Johnny White. George said that it was Bobby's fault.


It seems that Bobby was about to lap A.J. Foyt and he knew that A.J. would just about leap out of his car if he lapped him. George said that Bobby told him later that in his excitement to lap Foyt that he forgot about White and knew that White didn't see him going under him. Johnny White, at a very bad moment, moved down on Bobby. They collided and both went out of the race. It wasn't many months later Bobby Marshman lost his life in a fiery crash at Phoenix. It was a tragic loss for George and the racing fraternity. He was destined to be great.


George Marshman brought to life many of the facts that I could only read about. I hope that you remember that George Marshman isn't just a demolition derby promoter; Remember that he is one of the last living legends of auto racing.