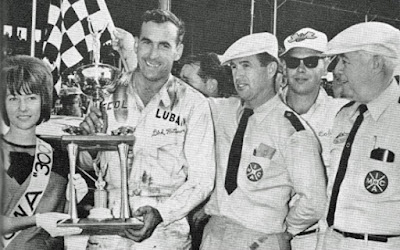 Three drivers, Don Hensley of Holden, Mo., Dick Pellow of Minneapolis, Minn., and last year’s winner, Chub Liebe of Oelwein, were treated for cuts and bruises suffered in a seven-car pileup on the 268th lap.

Earlier, Tiny Lund, the former Harlan, Iowa, jalopy driver, barely got his car in time to get into the grind which started an hour late and without qualifying times.

The crowd got only a brief look at Lund, now racing for NASCAR out of Cross, S.C. The 270-pounder was forced out by a clogged radiator, causing an over-heated motor, after 58 laps and a dozen pit stops.

Twice the red flags waved. The first time came at the 150th, lap when officials halted the race in order to make repairs to the track which developed dangerous holes in the first and fourth corners. The second time the red signals flashed, the back stretch was blocked with the litter of battered cars in a chain-like affair, triggered when Bob Jusola of Mound, Minn., was hooked by Ernie Derr of Keokuk.

Jusola went into a slide, then spun and stopped broadside of the oncoming traffic in a cloud of dust. Within the next few seconds parts of cars and cars were flying through the air.

Liebe, the fourth car to get involved in the crash, flipped over the top of Lenny Funk’s car and landed upside down. There wasn't enough of it left to identify it as a new Ford.

Washed out of action were Liebe, Pellow, Hensley, Funk, Jusola and Gil Haugan, the Sioux Falls, S. D., veteran who was in third place before the wreck. Others were against the fence or wall with mashed, but repairable fenders.

Twelve of the original 30 starters managed to finish after positions had been assigned by draw rather than by time trials, because of the muddy track.

It was the first “300” triumph for Hutcherson, the 1963 International Motor Contest Association national stock car champion, who blew his engine here a year ago.
Ramo Stott, a two-time winner who finished third in a blistering duel with Hutcherson, held the lead from eleventh lap through the 170th. Hutcherson contended he was the race leader when the affair was stopped at the end of 150 laps, but the official scorers ruled he was three fourths of a lap behind his rival, who had taken the lead, away from Derr earlier.

The crowd could see the play-by-play that went on between Stott and Hutcherson as the two went through the next home stretch, fender-to-fender, with gas pedals floored. Ramo’s finger and jaws were moving rapidly in Hutcherson’s direction.

For the first time in several seasons, Derr managed to finish - limping his Plymouth home to fourth money with the front suspension gone.

Bob Reynolds of Edmond, Okla., a Ford teammate of Hutcherson, knocked off second place money after catching Stott in the pits trying to correct a faulty steering caused by the rough track.