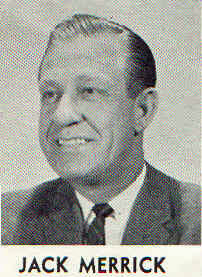 Merrick promoted not only the McCarty Speedway’s super-modified and stock car racing weekly during the racing season, but also took on the National Super Modified races in Hutchinson in July, the Five-States races in Liberal and the State Championships at the Kansas State Fair.

Merrick and his wife of 36 years, Esther, were involved with the State Fair races for 13 years, and the Nationals for 21 years. 1950 start

“Jack started in racing about 1950 with the IMCA sprint cars,” Mrs. Merrick said. ‘When he was young, he was interested in racing, and when he got out of the Air Force, some people got after him to help organize racing, to help with writing the rules and getting organized in 1945.”

“Jack knew everything about racing and knew about the necessity of things being done right, and done safely. He thought that if he started things right, it would catch on and others would follow, especially in the safety of racing. A lot of people have followed him, and most all of them have used his rules, with variations depending on their own tracks.”

“Racing was Jack’s hobby - his ‘only’ hobby. He worked as a Sales Representative for Colby Distributing since 1948, but racing was his way of relaxing. He could work four days a week then relax with his racing. He kept too busy, but he relaxed by being busy, and there was no way I could slow him down.”

Area drivers were full of praise for Merrick, who was on the Board of Directors of the National Championship Racing Association.

“I raced for Jack since 1969 and his races were the finest that I've ever been associated with,” Terry Uehling, Ness City super-modified driver, said. “I've run over a five-state area and I've been to races on the coast and of the organizations I raced for, Jack's was the best, developed and synchronized of all. We'll all definitely miss him for that.”

Fred Hembree, also of Ness City, echoed Uehling’s sentiments. “I started racing for Jack in 1972, and I enjoyed racing more for him than anyone else,” Hembree said. “Some people tried to organize racing at Wakeeney a few years ago, but no one could do the job that Jack could. I've been invited to race other places, but I'd always stay with Jack. I went to other places this past year, but I enjoyed racing for him the most.”

Jack and Esther worked hand in hand in the promotion business. “I had never seen a race before I met Jack,” Esther said. ‘At first, I always went with him but I stayed in the car. I wasn’t really too excited about it, but he was so involved, that I was bored if I wasn't helping him. I didn't get as involved as he did, but I helped in all aspects. It became interesting to me because he got me so involved because he was so involved. And he did need the help because you can only hire so many people. I was really glad to get involved.”

His witty sense of humor and ability to handle tough situations kept things moving smoothly both on the track and in the pits. “He teased people a lot, but when he did, they knew he liked them,” Mrs. Merrick said.

Merrick had been having breathing problems for some time. “Around the first of May Jack was working hard at the track trying to get it ready and he started having respiratory problems, shortness of breath,” Mrs. Merrick said. “I would have to take him in for oxygen every now and then when it would flare up. He had extensive tests run on him for heart trouble, but with the oxygen and some medication, he was doing just fine. The first of September, the shortness of breath came back. Monday night, his breathing was short, but I could tell something was different. He was on oxygen and he went to the hospital, but he slipped away.”