1976 - Appreciative Dake will return to racing next season 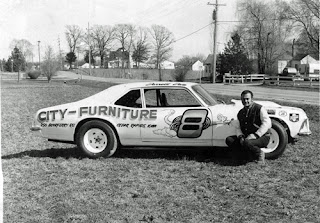 Sunday was Darrell Dake Day, at least in the minds of the 500 plus hearty racing fans, along with 18 of the areas top drivers, who turned out to make the Darrell Dake Benefit race a success despite the unseasonable weather. Dake, you’ll remember, perhaps one of the areas most popular drivers was injured in a spectacular crash at the Downs on August 6th.

The mishap placed him in serious condition for a number of days, prematurely ending his 1976 racing season. Well despite it all, Darrell was back at the Downs Sunday talking to his many well-wishers and friends, and playfully needling his fellow competitors.

“Don’t get too high on those turns," the 48-year-old Dake shot Eddie Sanger during a break in the action. “Yea, it's a regular dust bowl up there isn’t it?” grinned Sanger.

Such was the mood of the afternoon, with no one really caring who won, but putting on an exciting program nonetheless. “Why am I here?” Sanger later explained, “Because that could have been me in that car (Dake’s). Darrell is one of us. No matter where this race would have been, or how cold, we’d be there,” he continued, Dake was more than appreciative of the fan support as well as the drivers. "This is really great of everybody to come out in this cold weather," Darrell stated. “You know, I got more than 400 cards while I was in the hospital, a whole suitcase full. Racing fans are some breed of people, I just don't know how to say thank you,” he sighed.

Darrell needn’t have worried about thanking anyone. It was evident that the only thanks the fans wanted was the knowledge that he would be on the track next year. Dake didn't disappoint them. “I really feel good now,” Dake told the crowd between events. “I still go for therapy on my hand every day because it swells up every now and then, but it’s coming along. I’ll be back next year, in fact, I already have a car three-fourths of the way built.” Dake’s last words were silenced by the roaring approval of the crowd.

“I’m tickled to death he’ll be back next year,” smiled “Big John” Moss from Iowa City.

“I think Darrell looks and feels real good. You know, he helped me a lot when I first started racing 20 years ago, and I'm just glad I can finally help him out in some small way. He’s one of a kind.” Moss marveled. Added Shellsburg’s Jim Stodola, “Darrell’s given racing a lot of support over the last few years it's about time he's recognized.”

All of the drivers were racing for trophies, and no one went away empty-handed.

Stodola swept the Sportsman division which showed, only four entries, as he took the checkered flag in both heat races and also the feature. The only mishap of the day occurred when Jack Siegal hit the wall coming out of turn two in the feature. Siegal suffered only a slight leg injury.

In the Late Model division it was Ed Sanger who finished first in the 15 lap feature, pursued closely by Ron Weedon and Roger Dolan. Sanger and Weedon put on quite a driving exhibition as the lead changed hands between the two, three times on the eighth and ninth laps. Bob Schulte and Tom Bartholomew each claimed heat victories, while Dolan took the checkered flag in the trophy dash and Moss copped the Semi.

Some of the drivers even let the race officials drive their cars to add a little fun to the afternoon. In the six-lap “Officials Feature”, Phil Kraft took the checkered flag while piloting Stodola’s car, while Ed Otten took second hi Jerry Brumley’s ride. Flagman Engel DeKock and Promoter Al Miller finished third and fourth in cars owned by Tim McDonough and Sanger respectively.

Following the trophy presentations, and after the crowd had dispersed, Sanger and Dake acted out a fitting ending to the days’ events. “See ya in the spring, Darrell,” Sanger yelled across the infield.