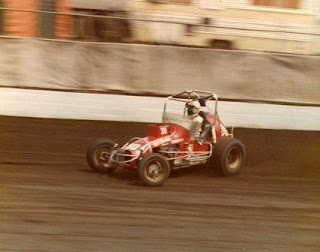 Dick Forbrook at the controls of the Algona, Iowa based Utt Electric #30 at the Iowa State Fair in Des Moines. - Photo courtesy of DirtTrackRadio.com


His car, which can be called a sprint or big car, is driven by Dick Forbrook of Morgan, Minn., who until recently was best known for his efforts behind the wheel of modified stock cars. Forbrook, married and the father of two children, has many modified wins to his credit and perhaps his top effort came in 1964 when he was the season point champion while competing in rugged competition at Jackson, Minn.

Jim's car will move — and it wound up 12th in qualifying time at one of the biggest sprint car races around, the Hawkeye Futurity in Des Moines. The vehicle was also right in the running for a top finish in the feature when a three-car spinout took it out of competition just before the checkered flag dropped. There were 50 cars entered in the annual Futurity event.

The Utt Electric Chevy is responsible for quite a bit of conversation in the Utt home here. Jim and his wife, Helen, often are caught talking about horsepower instead of house power. They also keep an ear tuned while work is being done on the sprint car so they can hear the telephone in case anyone needs help with an electrical problem.

Jim's interest in racing goes back quite a ways in years. He used to watch men like Gus Schrader, Emory Collins and other great ones drive racers powered with Offenhauser engines, which were king then. He became actively involved when he joined the pit crew of Gene Schattschneider, Algona stock car driver, a number of years ago.

He purchased a semi-modified car three years ago and began operating it on tracks at Jackson and Fairmont, Minn., plus a number of fair dates each year.

His jump into the sprint car end of racing came last fall when he purchased a car from Wayne Funk of Humboldt, who built it, using plans developed by Don Edmunds, well-known California designer and driver. Funk's decision to sell came after a serious mishap at Wausau, Wis., last summer when he sustained severe head and neck injuries.

Besides a number of sprint dates, the Utt Electric Chevy is also run weekly at the super modified event at Knoxville, Iowa, one of the hottest tracks in the Midwest. A 4-post roll cage is mounted for the driver's safety in those races.

Utt's car is powered by a Chevrolet engine, modified for racing use with fuel injection, magneto ignition and a roller camshaft to produce the most possible power per cubic inch. Methanol is used for fuel because of its greater power output — and it is also safer than gasoline. Most of the car's components are of durable and strong lightweight materials.

The Utts readily admit they have a hobby that probably consumes more time than most - but they really enjoy it.