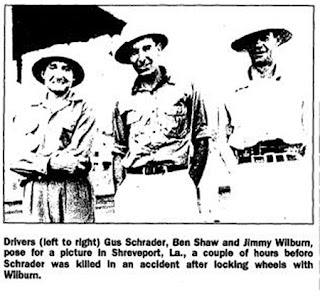 Shreveport, La. (October 22, 1941) – Gus Schrader, 47, of Newhall, Iowa, died of a broken neck suffered when the car he was driving in a race at the state fair hurtled through a fence.


Schrader, of Cedar Rapids, Iowa, was driving just behind Jimmy Wilburn, Portland, Ore. Both machines were “wide open” – estimated to be going more than 60 miles per hour - and ahead of the field when Schrader's front wheel locked with Wilburn's back wheel.

Schrader was thrown through the inside fence, landing on his head. His auto tore through the outside fence. He died two hours later in a hospital. Wilburn was not injured.

The accident occurred at the first turn on the one-mile track in the last of a series of races. Mrs. Schrader was in the stands. Schrader had planned to return to Cedar Rapids and later to race in Canada.

Gus Schrader was a familiar figure in Iowa racing circles for a number of years.

He had been talking about retiring for the last two years. When in Des Moines for the 1941 races at the Iowa State Fair, he informed his friends that this would be his final year of competition.
Schrader had competed at the state fair annually. He had purchased a farm with part of prize money he earned.
In more than 20 years, he had competed in more than 1,100 races and won an average four out of seven starts.

He competed once in the Indianapolis 500-mile race - in 1935. He was forced to withdraw after 116 miles when his car developed motor trouble.

Schrader started his career as a motorcycle rider. Soon after his discharge from the army during the First World War, he began racing cars. In 1932 he won his first of eight national dirt track championships under the auspices of the International Motor Contests Association.

During his lengthy career, Schrader had only two serious accidents, neither was in auto races. In 1926, he was tossed from a motorcycle in a race at Anamosa, and in 1937 he was hurt in a highway accident in California.