By Lee Ackerman
Omaha, Neb. - As the late model class came into its own in the late 60’s and early 70’s, a series of big races or “specials” started to pop up at tracks across eastern Nebraska and western Iowa with the hopes of attracting big name drivers from outside the area. That didn’t seem to happen with much success. So in 1972 Sunset Speedway promoter Lyle Kline decided to try something a little different. He increased the purse and also decided to have the race late in the season when other tracks were shut down. 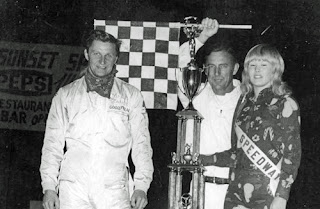 On October 2, 1972 the inaugural running of the Cornhusker-Hawkeye Challenge was held at Sunset Speedway northwest of Omaha. The race was designed to see whether eastern Iowans or eastern Nebraskans were better drivers. It would turn out over the years that the Hawkeyes would dominate the Cornhuskers. That October night turned out to be a disappointing time for local fans and drivers as Cedar Rapids, Iowa’s Verlin Eaker totally dominated the show, winning his heat, trophy dash and leading all 100 laps of the feature. In fact, Eaker finished a half lap ahead of runner up Bill Zwanziger of Waterloo, Iowa. Denny Hovinga brought home a third place finish for western Iowa fans with perennial Sunset points champion Bob Kosiski coming home fourth and Bob Hilmer of Dysart, Iowa rounding out the top 5. The event drew 55 cars with 29 coming from eastern Iowa.

In 1973, 2,350 fans showed up for the 2nd running of the October Classic which drew 63 cars. Unfortunately for the locals they would go home disappointed again as Cedar Rapids, Iowa’s Darrell Dake wheeled his 1972 white #8 Nova to the checkered flag. Unlike Eaker the year before, Dake had to do it the hard way. Dake won a consolation race and started the 100 lap feature in 21st place. By the halfway point of the race Dake was leading and went on to take first place money of $1,500 plus $250 lap money. Waterloo, Iowa’s legend Ed Sanger would bring his familiar #95 home in second place with Estherville, Iowa’s Bob Shryock in third. John Connolly of Delhi, Iowa finished fourth with Randy Sterner of Blair, Nebraska the leading Cornhusker in 5th place. Ed Morris of Omaha was the only other Nebraskan in the top ten with a 7th place run. 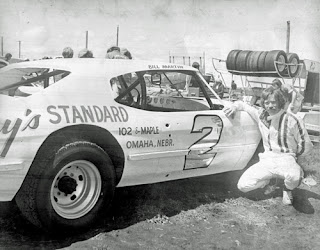 On October 6, 1974, after being rained out, the third annual Cornhusker Hawkeye Challenge was held at Sunset. Finally, the locals had something to cheer about. Bill Martin of Council Bluffs and a Sunset regular took the lead with 66 laps to go when leader and former winner Verlin Eaker’s engine quit. Martin would pocket $1,590 for winning the event. After the race Martin said, “The track was in such bad shape because of recent rains that I thought we would break something, but the car really worked good tonight.” To add to the local celebration, Omaha’s Jerry Wancewicz came home second. Bill Beckman of Lisbon, Iowa was third, Blair, Nebraska’s Randy Sterner fourth and Delhi, Iowa’s John Connolly fifth.

The local’s celebration was short lived as the eastern Iowa dominance was back in 1975. On October 4, 1976, Curt Hansen of Dike, Iowa wheeled his familiar blue #9 Camaro to the win after a see-saw battle with fellow eastern Iowan, Ed Sanger of Waterloo.

Hansen took control of the race on lap 70 and lead to the end in a race that saw Hansen leading 55 laps and Sanger 43. The vent was marred by tragedy as Jefferson, Iowa’s Rich Lyons was killed in a freak pit accident. It was the first fatality at Sunset in its 19 year existence. Duane Steffe of East Moline, Illinois completed the sweep for the invaders, with Omaha legend Bob Kosiski finishing fourth and Bill Zwanziger of Waterloo, Iowa fifth. Eastern Iowa drivers took 8 of the first 9 finishing spots.

The fifth addition of the annual event was ran on October 2, 1976 and saw the familiar blue #9 Camaro of Curt Hansen back in victory lane. Hansen took the lead on lap 35 when leader “Injun Joe” Merryfield of Des Moines lost his transmission. The 31 year old Hansen would sail to the win and a check of $1,525. Tom Stueding of Altoona, Wisconsin added some outside flavor to the race and finished second. Em Fretheim of Decorah, Iowa was third, young Joe Kosiski of Omaha fourth and George Barton of Ankeny, Iowa rounded out the top five. 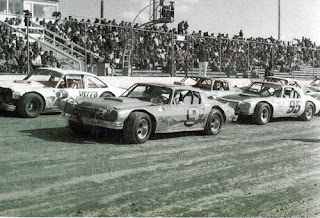 Curt Hansen (#9) and Don Hoffman (#2) lead the field at the start of the 1977 Cornhusker - Hawkeye Challenge.
On October 2, 1977 the sixth version of the race was ran on Sunday afternoon, after being rained out the previous night. Despite a dusty track this would turn out to be one of the most exciting finishes in the history of the race. Two-time and defending champion Curt Hansen set on the pole and led for most of the race before giving way to Ed Sanger on lap 78. From there to the end it was a battle with Hansen pulling along side of Sanger several times but not able to make the pass. Midway through the final turn on the last lap, Hansen was able to get by Sanger and win the race by one-half car length to claim his third straight Cornhusker Hawkeye Challenge. Hansen pocketed $1,510 for his effort. Bob Kosiski upheld the local’s pride with a third place finish with Joe Merryfield of Des Moines fourth and Bob Shryock of Estherville, Iowa fifth. 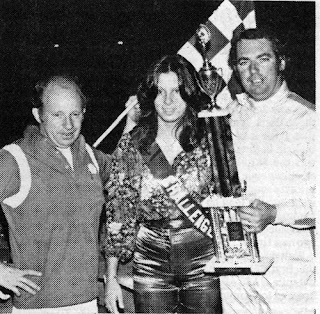 Gary Crawford was the overall points champion of the two-day Cornhusker - Hawkeye Challenge in 1978.


In 1978 the race changed locations and formats. The event was actually a two day event, with the first race on September 30 at the Shelby County Speedway in Harlan, Iowa followed by a companion event the next day at Midwest Speedway in Lincoln, Nebraska. Points were given for heats, trophy dashes and features and at the end of the two day affair; Gary Crawford of Independence, Iowa compiled 400 points and won the coveted trophy. Curt Hansen of Dike with a second at Harlan and a first at Midwest was second at 390 points. Dean Ward of Grand Island, Nebraska was third in points and Joe Merryfield despite a feature win at Harlan and a second at Midwest finished fourth in the points. Clayton Peterson of Grand Island, Nebraska with a third at Midwest claimed fifth in the overall points. 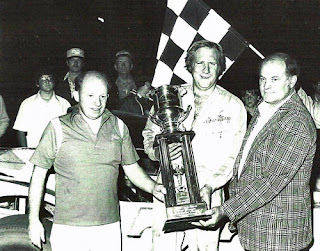 Mike Niffenegger is joined by promoter John Beaman (left) after winning the 1979 event.

In 1979, the event was a two day affair at the Shelby County Speedway in Harlan. A huge field of cars saw Friday night action include 8 heat races and 4 consolation races. On Saturday night a consolation race, trophy dash and semi precluded the 27 car, 75 lap main event. Mike Niffenegger of Kalona, Iowa took advantage of his pole position and jumped into the lead, by lap 19 Don Hoffman of Des Moines had moved up to challenge from his fifth starting position and finally on lap 18 took the lead from Niffenegger. The two literally ran away from the field with Niffenegger trying repeatedly to get the lead back. Finally after 10 laps of trying Niffenegger regained the lead and held it to the end of the race. An interesting note about Niffenegger’s car was that he was running Goodyear’s on the front and McCreary's on the rear. Don Hoffman held on for second with Tom Hearst of Wilton, Iowa third, Joe Merryfield of Des Moines fourth and Dick Schiltz of Waterloo, Iowa fifth giving the Hawkeye’s another sweep. 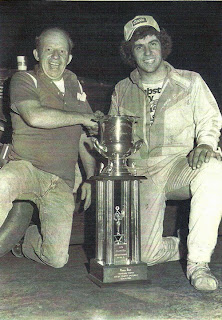 Kevin Gundaker is all smiles in victory lane after winning the 1980 Cornhusker - Hawkeye Challenge.

The ninth and what would be the last Cornhusker Hawkeye Challenge was run in late September of 1980 in Harlan. The 75-lap feature went to an outsider, as Kevin Gundaker of St. Louis, Missouri drover his #11 to victory. Second went to a young and up and comer out of Des Moines who would be destined for dirt late model greatness in Billy Moyer, Jr. Dick Schiltz was third and 1978 World 100 winner Ken Walton of Viola, Iowa was fourth.

So would come to an end the tradition of the Cornhusker Hawkeye Challenge. There is no doubt that drivers from eastern Iowa dominated the event. But then again if you look back at the 70’s, eastern Iowa drivers were a dominant force in dirt late model racing across the country. In fact, eastern Iowa drivers won the prestigious World 100 four times in a seven year span in the 70’s.