1981 – A gracious lady among the Outlaws 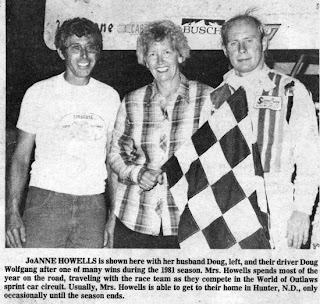 by George Peters
Hunter, S.D. (October 13, 1981) – Until a few years ago, women were seldom seen in the pit area at most race tracks. Times have changed of course, so that when the World of Outlaws appeared at any track in 1981 you could all but bet that a very gracious lady would be present.

The reference is to JoAnne Howell, who with her husband Doug, travel the entire World of Outlaws circuit as owners of the #4 Howell Special with Doug Wolfgang aboard as the driver.

The Howell’s have made every World of Outlaws show in 1981. JoAnne is a very vital part of this extremely busy and ambitious operation. The Hunter, North Dakota couple travels the circuit with the truck and hauler as the crew’s only permanent members.

The distance between two consecutive racing dates may be hundreds of miles, so Doug and JoAnne take turns with the driving chores. At some tracks, friends and/or volunteers may pitch in to help handle the endless jobs that confront any pit crew. The Howell's are a definite asset to racing as they constantly demonstrate a friendly, cooperative demeanor.

The Howell’s have been married 28 years. At the time of their marriage, Doug had yet to become fully active in auto racing. When they met in Hunter Doug was in college while JoAnne was working as a secretary.

When Doug became fully committed to racing participation, he began with modified coupes in the upper Midwest (North and South Dakota, Minnesota, etc…). From there it was a natural step up to the super modified cars. Doug stopped driving while partner Dwayne Englestad handled the chauffeur chores. Eventually Dwayne was bought out and the Howells hired Don Mack as their driver. This relationship would endure for over a decade and a half.

Along the way, Doug became an extremely talented mechanic while Don was making a name for himself as a top notch wheel man in the Midwest. The Howells and Mack worked both independent and International Motor Contest Association (IMCA) shows.

During most of this period, the racing operation was essentially a weekend arrangement as the couple was usually back in Hunter at their jobs on Monday mornings. Since they worked at a garage owned by Doug’s father, they were able to exercise a bit of latitude, occasionally being able to delay a rush trip home.

JoAnne vividly recalls one extensive journey to far-off Rossburg, Ohio as their car competed in a Sunday afternoon event, yet they were on their jobs back home in North Dakota the next morning. Don’t ever get the idea that racing folks are not dedicated.

Some may say it helps to be a bit crazy. I can imagine a wry smile on JoAnne’s face if she heard such a comment as the lady’s charms include a great sense of humor.

The racing endeavors of the Howells were largely confined to the upper Midwest, however, on occasion they would venture off as far as Florida and the old Tampa fairgrounds. In 1979 Doug Wolfgang drove for the Howells several times and also piloted the car in Florida in the spring of 1980.

When Don Mack decided to retire in May of 1980, the Howells promptly hired “The Wolf”. Not only did the couple begin working with Doug, they also decided to go with the World of Outlaws on a full-time basis. The association was a successful undertaking as Wolfgang drove to 7 wins and finished second in the 1980 World of Outlaws point standings. Only a red hot Steve Kinser surpassed Doug’s point count.

During the course of the 1980 season the Howells traveled 65,000 miles. They did not return home until November and by February 1st, they were on the road again. Even the stay at home was briefly interrupted as the two Doug’s out finishing touches on a new Trostle sprinter in preparation for the 1981 season. Doug Howell spent another week and a half in Minnesota as he checked out the motor in the overworked truck.

Another extended and challenging trip JoAnne remembers took place as the Knoxville Nationals were completed this past August. The couple headed for Lakefield, Minn., as they were down to one working engine. The journey carried them to the Lakefield shop of L.L. Woodke, the builder of their racing engines. When the work was finished, the Howells were away quickly as the Outlaws were scheduled to run at Kokomo, Ind., the next day.

When asked why she has allowed herself to be punished by the long hauls and the other rigors associated with racing, JoAnne replied, “It’s in our blood.” The response was a cheery one, not even with a tinge of remorse. In talking with her, you definitely got the impression that she truly does enjoy the sport as much as anyone – male or female.

While JoAnne does not take a continuing role in the nitty-gritty mechanical work, she is ever present to lend a helping hand, to oversee and coordinate the effort, and to offer words of encouragement.

As far as she knows, no other wife travels full-time with the World of Outlaws organization. JoAnne was asked to cite the greatest joy experienced in racing by the Howells. She thought a moment and said, “Winning any big race.” The most vivid of these at the moment was the big triumph at the Eldora Nationals in August.

JoAnne expressed particular delight in that the Outlaws had a swing through the Upper Midwest in July – with races almost in their “backyard”. When the Outlaws ran at Fargo, the Howells had a brief touchdown stay at home. More importantly, they were able to see their offspring, their daughter Linda. Even here there is a racing connection for Linda’s husband; Leroy Grosz is the mechanic for the car of Linus Mack. Linus, a resident of East Grand Forks, Minn., is the son of Don Mack, the Howell’s driver for many years.

For anyone who has been around the Outlaws anytime at all, it soon becomes evident that the gracious lady from Hunter, N.D., is a definite plus for the sport. Consider Doug Howell as well and you have a great couple that represent an asset to auto racing.

It is refreshing to see such an open, warm and cordial couple in a sport that at times is a tightly fought struggle between hard as nails antagonists.