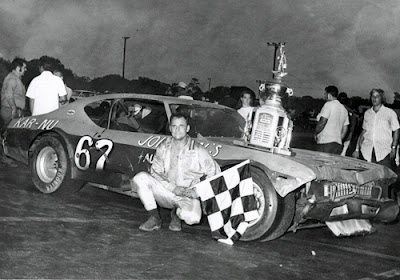 Michigan’s dynamic duo started their domination of Tri-County's final event by qualifying one-two. Howe was fastest qualifier with a time of 18.954 seconds {94.96 mph) and felt he could have broken his own track record of 18.83 seconds if the car hadn’t been missing.

Howe started twelfth and on lap 16 dropped low under Bob Senneker in turn four and led for the rest of the first 50 laps. At the end of the first leg Maier was fourth behind Senneker and Larry Moore.

The drivers changed cars at intermission and Maier took the lead on the restart in the faster Chevelle with the 380 cubic inch engine and was never headed. By the third lap of the second leg, Howe, in the 427 cubic inch Chevelle, was challenging Rodney Combs, who took over Moore’s car, for second. The two ran side by side for about 12 laps with Howe on the inside. Combs got caught behind a slower car going down the back straight, and on Maier and Howe pulled away from the field.

By lap 90 they had lapped everyone but Dick Dunlevy. Meanwhile, Combs’ car developed mechanical problems and he finished far back.

With nine entries in six major races at Tri-County this year the Howe – Maier combination has posted five firsts, two seconds, one third and one DNF. Last week Maier won the Pittsburgh 250 at Heidelberg Raceway and Howe was fifth.

Bruce Gould and Joe Stricker did not enter the relays because Gould had been sick for a few days and didn’t feel strong enough to race.