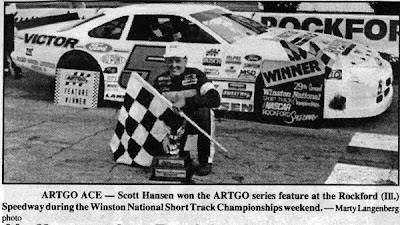 1994 – To use one of racing’s clichés, Scott Hansen “had them covered” Sunday afternoon, September 25 at the 29th annual National Short Track Championships at Rockford Speedway. Hansen of Green Bay, Wis., exploded from his eighth starting position into the early lead and led 224 of 300 laps in the ARTGO Challenge Series event. Hansen took the lead on lap 20 and stayed there until a pit stop on the 183rd tour, giving way to Rick Beebe. Hansen sliced and diced back through the pack and passed Beebe on lap 241. He pulled away to record his first career NSTC victory by eight seconds over two-time and defending champion Steve Carlson of West Salem, Wis. Kevin Cywinski, Steve Holzhausen and J.R. Roahrig rounded out the top five. 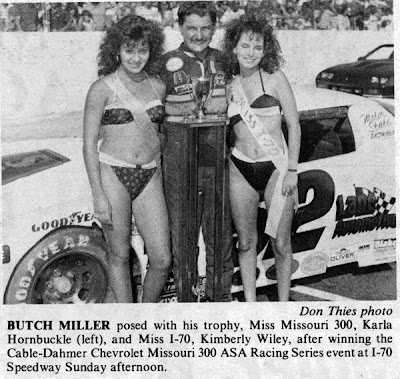 1988 – Butch Miller won his third straight ASA Racing Series event Sunday Afternoon, September 25, by capturing the rain-delayed Missouri 300 before a crowd of 4, 892 at I-70 Speedway in Odessa, Mo. In ASA’s first race since 1980, Miller took control when previous leader Dave Jackson pitted on lap 219, and went on to a half-lap victory over Dick Trickle. Miller, who averaged 76.616 mph, earned $8,175 in prize money and awards for his fifth win of the year on the competitive circuit. Polesitter Trickle led the first 109 laps, but bad tire stagger hampered his efforts. Bob Senneker, Tom Jones and Jackson were the top five finishers. 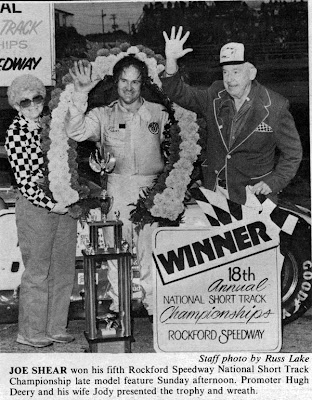 1983 - Joe Shear grabbed the lead on the 40th circuit and outran both Tom Reffner of Rudolph, Wis., and Dick Trickle of Wisconsin Rapids, Wis., to capture the National Short Track Championship 200-lap super late model feature for his record fifth career victory in the 18th running of the event on Sunday afternoon, September 25 at Rockford Speedway. Shear, who started the contest in the sixth position, worked his way to third place behind front-running Steve Murgic, Rosemount, Minn., and Conrad Morgan of Dousman, Wis., on lap 8. Six laps later, the Beloit, Wis., driver powered by Morgan to claim second. Murgic maintained the top spot until lap 40 when Shear took command on the backstretch. For the remainder of the race, Shear fought off the persistent challenges of Reffner and Trickle. 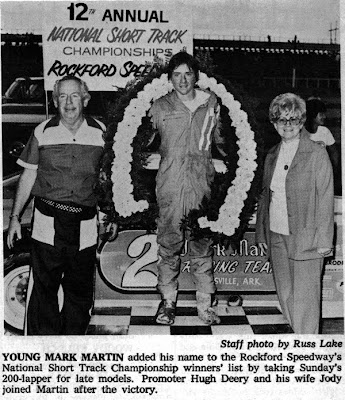 1977 – Eighteen-year-old Mark Martin of Batesville, Ark., won the 200-lap late model feature to capture the 12th annual National Short Track Championship at Rockford Speedway on Sunday, September 25. Martin took the lead on lap 176 when a blown engine sidelined front running Tom Reffner of Rudolph, Wis., and went on to cross the finish line ahead of Dave Roahring of Plymouth, Ind., who had started 32nd in the 33-car field. Dick Trickle of Wisconsin Rapids, Wis., recovered from an accident on lap 116 to take third place money. Ed Hoffman of Niles, Ill., the only other driver to complete the 200-lap distance, finished fourth and was followed by Ray Young. Reffner took the lead at the green flag and was in command throughout the long-distance affair until a blast of smoke came from his Bemco-built AMC Hornet, ending any chance of victory and relegating him to a 18th place finish.