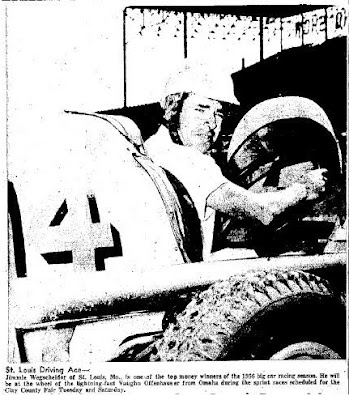 Spencer, Iowa (September 6, 1956) - Auto racing, always one of the top attractions of the Clay County Fair, is on the program again this year with the richest prize money in history offered to the nation's best drivers.

Bill Woods, secretary of the Fair, announced that three days of action-packed races have been scheduled with a record size purse of $7,500 on the line for the driving experts to divide.

Two days of big, speedway-type racing will be presented and one day of late model stock cars. The big cars will take over the lightning-fast half-mile Fairgrounds track on Tuesday, September 11, and Saturday, September 15. Stock car races will be held on Friday, September 14.

All three of the racing dates have been sanctioned by the International Motor Contest association, the oldest and largest dirt track governing body in the United States.

Frank B. Winkley of Minneapolis, president of Auto Racing, Inc., and a veteran of 30 years in speed sports, will be in charge of all the races.

Both of the big car dates, September 11 and 15, have been given a championship meet classification by the IMCA, which means that the races are open to all registered drivers in the IMCA and that the drivers will earn twice as many points toward the national title as they do in invitational races.

With that incentive, plus the $5,000 in prize money, the drivers will be going all out which might produce some track and world IMCA records. Marks have been falling all year under the churning wheels of the big cars and there is no reason to doubt that with the right track conditions records will also go by the books here.

Seven sprint events are scheduled for the speedway-type machines each day. Action will start at 2 p.m. with time trials in which the cars and drivers take a one lap time trial around the track to determine their starting positions in the following competition.

First race is scheduled to start at 2:30 p.m. Most of the cars entered are powered by Offenhauser and Ranger engines, considered by racing experts as the top racing motors in the world.

Highlighting the afternoon of stock car action on September 14 will be a grueling 100-lap race which taxes both the car and the driver to the extreme. Time trials for the stock car races are also set for 2 p.m. with the first race slated for 2:30 p.m.

Almost every brand of car seen on the highway today will be in action during the afternoon of speed - Chevrolets, Oldsmobile’s, Dodges, Fords, Plymouths, Pontiacs, Buicks and Mercury’s.

Under IMCA rules, the stock cars must be standard American makes with hard tops, manufactured during or after 1951 of which 500 or more units must have been manufactured and sold to the public. Convertible stock cars may compete if they are fitted with a double hoop roll bar that adequately protects the driver.

Hard top convertibles, without a center supporting post built in at the factory, must be equipped with an inside roll bar. Such roll bars must be approved by the technical committee of the race meet.

The engines of the cars must be stock equipment made for the body and chassis in which it is installed. There can be no special racing parts used. The motor and all component parts must be those produced by the manufacturers and carry the parts number.

Strengthening of the steering gear, pitman arm, tie rods, spindles, rear hubs, and tear axles is allowed for safety's sake - both for the driver and the fans.
The cars must be equipped with a safety belt and/or shoulder harness welded or bolted to the frame.

Some of the favorites who will be in action in the big car races include a trio of Californians - Jack Jordan of Alhambra, Johnny Pouelsen and LeRoy Neumayer, both of Gardena - Jimmy Wegscheider of St. Louis, Tommy Smith of Minneapolis, Harry Ross of Houston, Texas, Bert Hellmueller of Louisville, Ky., and Marvin Faw of Minneapolis.