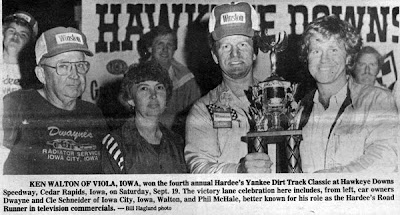 Cedar Rapids, Iowa (September 19, 1981) - It took Ken Walton the entire regular season at Hawkeye Downs Speedway to pick up his first feature win. And the Viola driver couldn't have picked a better time.

Walton, who set a track record in the time trials Friday with a 21.237 clocking over the half-mile oval, eased past Ed Sanger of Waterloo on the 42nd lap Saturday and cruised to the feature victory in front of a full house at the Hardee’s Yankee Dirt Track Classic.

“I just got a new car about a month ago and it’s just super,” said Walton, whose car is owned by Dwayne and Cle Schneider. “I just want to thank Dwayne and Cle for getting me such a great car.”

“I knew once I had the lead the only thing that would stop me is if my car had problems. I never worry about getting beat once I pass a guy.”

Walton was never challenged after taking the lead in a race that only produced one red caution flag over the entire 100 laps.

That flag came down on the 96th lap when Dick Schiltz of Waterloo and Pete Parker of Kaukauna, Wis., collided in front of the grandstand. Both were uninjured and continued racing.

Jim Curry of Norman, Ind. took the early lead and held it until the 20th lap when Sanger took over. Sanger held the lead for 22 laps. Sanger came across the finish line 10.5 seconds after Walton for second place and Mike Niffennegger of Kalona was close behind. Tom Hearst, who wrapped up the Winston season point championship Saturday, was fourth and Billy Moyer of Des Moines was sixth.

According to the Winston racing crew, the 100-lap event took 40 minutes, 11 seconds and the race had an average speed of 74.657 mile per hour.

Earlier in the evening, Parker won the Trophy Dash, consisting of the six fastest qualifiers in time trials, at an average speed of 79,958 mph.

In other action Saturday, Craig Spetman of Omaha, Neb. averaged 75.413 mph while winning the 20-lap B feature. Spetman took the lead from Bill Beckman of Waterloo on the fifth lap and was never challenged again.

Ken DeGood of Hills, Iowa, took the lead in the 20-lap C feature on the second lap and hung on for the win. DeGood took the lead from Scott Braun of Cedar Falls. Braun, who raced in the Sportsman Division in the regular season, finished second.