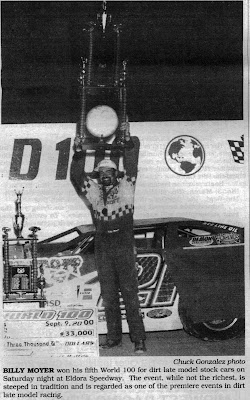 2000 – Billy Moyer’s homework paid off handsomely, Saturday night, September 9, when he became a five-time winner of Eldora Speedway’s annual World 100 dirt late model classic. Just six night’s prior, Moyer took advantage of a $2,000 to win at Eldora to drop in and do some testing. The victory earned that night was overshadowed by the education he received in preparation for the $33,000 to win a week later. Moyer stayed with the lead group before taking the runner-up spot from Bill Frye on lap 37. Moyer then dogged race-long leader Davey Johnson for some 30 laps before executing a nifty slide job on Johnson that gave “Mr. Smooth” the lead on lap 70. Moyer then held off a stubborn Scott Bloomquist for the remaining 25 laps and won by one-half car length at the checkers. Johnson crossed the line in third followed by Steve Francis and Frye. 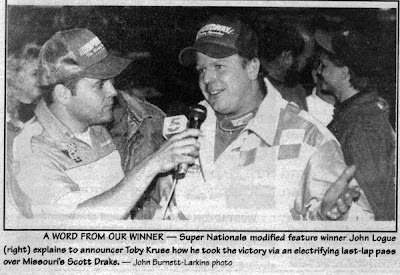 1995 – Hometown hero John Logue slipped underneath Scott Drake of Joplin, Mo., going into turn four on the final lap to win the 40-lap IMCA modified feature at the Keith Knaack Super Nationals at Boone Speedway on September 9. He then held off Drake at the wire as the overflow crowd went wild when Logue took flagman Bill Olson’s checkered flag. “I left him too much room and there isn’t anything else I can say,” a dejected Drake said afterwards. The victory was worth $2,000 in cash and an additional $5,000 in contingencies for the defending Boone Speedway track champion. Ronny Gould of Denison, Tex., Jeff Barkdoll of Vinton, Iowa and Johnny Bone Jr. of Pea Ridge, Ark., rounded out the top five finishers. 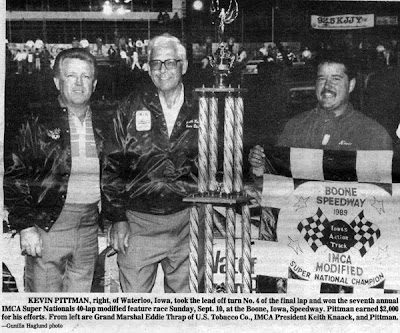 1989 – Kevin Pittman of Waterloo, Iowa was a surprised and happy winner Sunday night, September 10, at the 7th annual IMCA Modified Super Nationals at Boone Speedway. Pittman took the lead in the 40-lap feature event coming off of turn four on the final lap to pocket $2,000 and score the biggest win of this five-year career. In a race that saw the first four leaders of the feature (Mark Noble, Mike Smith, Wayne Larson and Rex Merritt) drop out because of flat tires or mechanical issues, Tom Bartholomew of Huxley, Iowa took command of the feature midway through and appeared to be headed to victory lane when a flat tire on his car, coming out of turn two, slowed the veteran down as he entered the final turns. Upon seeing the lead car’s misfortune, Pittman ducked low and Denny Schwartz of Ashmore, Ill., went high around the ailing Bartholomew with Pittman coming out of the final turn barely in front. He managed to beat Schwartz to the checkers by a car length. Kelly Shryock of Story City, Iowa, Dave Erpelding of Algona, Iowa and Doug Hilson of Blooming Prairie, Minn., rounded out the top five 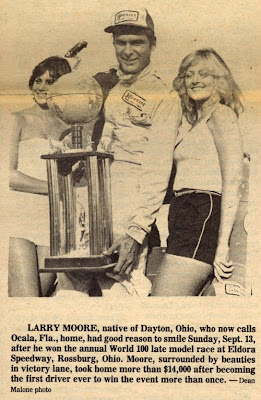 1981 – Larry Moore of Ocala, Fla., survived a three-car duel to win the annual World 100 at Eldora Speedway in Rossburg, Ohio, on Sunday, September 13. Moore inherited the top spot after race leader Jack Boggs of Webbville, Ky., tagged the wall midway through the contest. Moore then held off the duo of Mike Duvall of Gaffney, S.C. and Don Seaborn of Dayton, Ohio for the remaining quarter of the feature. The victory for the Dayton, Ohio, native netted him over $14,000 and made him the first driver ever to win two World 100’s. A couple of Georgia pilots, Buck Simmons and Doug Kenimer, rounded out the top five. Totaled, 203 cars from 17 states checked in for the dirt late model classic.