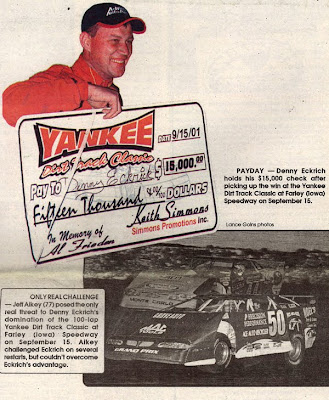 Eckrich, a Coralville driver who won the late model track championship at West Liberty Raceway this season, started on the outside of the front row and led 95 of 100 laps to win the 24th Annual Yankee Dirt Track Classic late Saturday night.

A capacity crowd estimated at 5,000 fans - hundreds of who were camping just outside the back straightaway - watched Eckrich collect a $15,000 paycheck for the win.

“I’d like to dedicate this win to Grandpa,” Eckrich said from victory lane. “Eight years ago we lost him up here (to a heart attack), and he said we'd win it. This one’s for him.”

Eckrich had the fastest car on the track all night. He shot into the lead as soon as the green flag flew and kept it until the third of the race's 10 cautions came out on lap 25.

On the restart, NASCAR Winston Racing Series Midwest Region champion Jeff Aikey of Cedar Falls - who had came all the way from his 22nd starting position to third place in those first 25 laps – shot underneath both Brian Birkhofer and Eckrich and into the lead.

Eckrich and Aikey spent the next five laps engaged in exhilarating side-by-side racing before Eckrich secured the lead for good on lap 31.

Cautions kept sending the slower traffic to the rear of the field, but lapped traffic really came into play over the race’s final 25 laps when Eckrich, Darren Miller of Chadwick, Ill., and Aikey were fighting for the lead.

All three made it through, and when the 10th and final caution came out on lap 94 - once again sending the lapped cars the back – Eckrich’s victory seemed assured.

“Lapped traffic was a problem,” Eckrich said. “You had to be patient enough to get around them because they didn’t know you were there. I was lucky to get the caution (on lap 94). Darren was really putting the pressure on me but I knew if I could get out in front I could hold him off.”

Josh McGowan of Vinton earned the pole after winning a heat race Friday night and a six-car, six-lap shootout Saturday night. McGowan raced a pro stock at Benton County Speedway in Vinton for four years and is in only his third year of driving a late model.

“This is my second Yankee and it's very overwhelming,” McGowan said of starting on the pole. “It hasn't really set in yet.”

“All these cars are fast (and) there’s not a dog in the field. The wall is intimidating here because the speeds are so high but we love it and it's a lot of fun. There are a lot of good guys to race with.” McGowan dropped out of the race on lap 74.