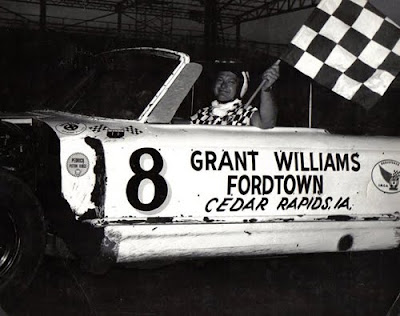 Dake, who started on the pole, took the lead on the first lap in the accident-marred championship feature, and though pressed, was never headed.

An accident on the 72nd lap sent Buzz McCann of St. Paul, Minn., to St. Luke's Hospital where he is listed in fairly good condition with possible internal injuries. McCann slammed into Lyle McNull of Aledo, Ill., after McNull spun out in a cloud of dust on the second turn. McCann was then hit by Harry Odeen of Marion.

Ben Hofer of Rock Island, Ill., bought the crowd to their feet when he put his 1965 Chevrolet right on Dake's bumper on the 98th lap and stayed there as they crossed the finish line in what was described as one of the most thrilling races ever held at Hawkeye Downs.