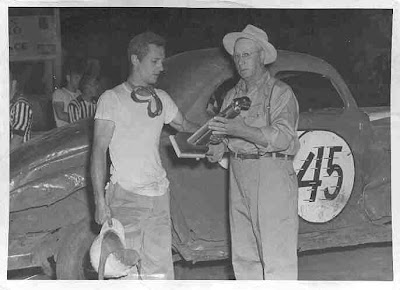 It was a return to form for Parker, who had fallen off of his fast pace set all season. Parker took the lead from Bob Kosiski on the sixth lap, and led the field the rest of the way.

The only other Iowans to break into the money in the early races were Johnny Beauchamp of Haran and Vern Robey of Council Bluffs.

Beauchamp ran third in the second heat of the afternoon, and then was put out of action by motor trouble until the feature. Robey won the third heat, but was put back to third for rough driving, giving Don Williams of Omaha the victory and making Parker second.

Bobby Kendall of Omaha broke the hard luck streak bothering him with a victory in the consolation, the last race of the local season. Kendall went to the top when Keith Rachwitz hit a stalled car after running in first place most of the race.

The track was very slick, causing many cars to spin out coming out of the curves and causing many minor accidents.

Bob Kosiski, the winner of the feature at Riverside last Sunday, opened the card with a victory, but ran into bad luck the rest of the afternoon.