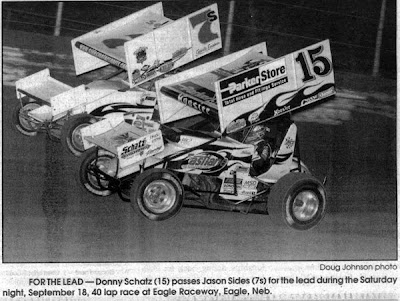 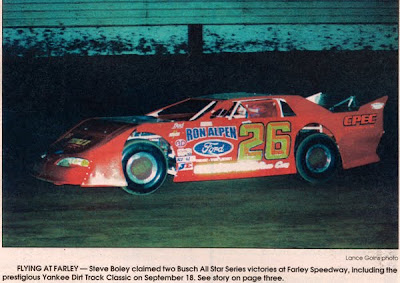 1999 – Steve Boley had quite the weekend at Farley (Iowa) Speedway as he captured his first career Yankee Dirt Track Classic on Saturday, September 17. Boley made it into Saturday night’s finale by virtue of his third-place finish in the Friday night qualifier. Boley, who started 15th, was one of three leaders in the 100-lap contest. Boley and Denny Eckrich swapped the top spot several times before Boley secured the lead for good on lap 65. Eckrich, initial leader Bob Dominacki, Terry Neal and Jeff Aikey rounded out the top five finishers. “It’s a race that I’ve wanted for a long time,” said Boley. “I finally won the Yankee!” 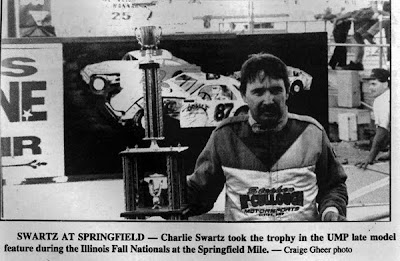 1994 – Veteran late model driver Charlie Schwartz won his first Illinois Fall Nationals at the famous Springfield Mile on Sunday afternoon, September 18. “It must have been my day,” Schwartz said moments after outdueling Billy Moyer Jr. in the 40-lap main event. Of the $50,000 purse paid out by promoter Bob Sargent, Schwartz collected $10,000 for the win. The Kenton, Ohio driver munched dust from early race leader Bill Baird for the first 19 laps before Baird got loose near the turn two wall, allowing Schwartz to surge into the lead. From there, the Schwartz veteran never faltered, holding off several charges by Moyer in the last few laps. Moyer, Bob Pierce of Danville, Ill., Steve Boley of West Liberty, Iowa, and Ray Guss Jr. of Milan, Ill., followed Schwartz across the finish line.

1988 – Steve Kosiski of Omaha, Neb., won his first career Yankee Dirt Track Classic at Hawkeye Downs Speedway in Cedar Rapids, Iowa, on September 17. The 1987 winner, Dale Fischlein, started on the pole and led the first 40 laps of the race. Kosiski, who started on the third row, passed Steve Boley for second on lap 17 and then snatched the top spot from Fischlein on the 41st circuit. Steve’s brother Joe also got by Fischlein 10 laps later and chased his brother the rest of the way. The NASCAR/Busch All Star Tour event paid Kosiski $4,000 for the victory. Competing against Kosiski in the feature were 29 other drivers including former Yankee winners Ken Walton, Tom Hearst, Ed Sanger and Fischlein.